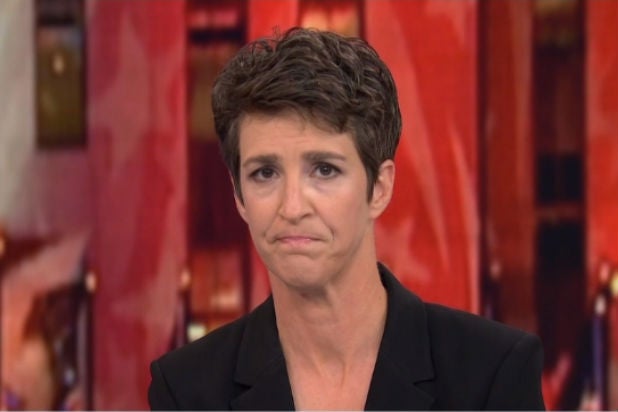 Following Vice President Mike Pence’s keynote speech at the 2020 Republican National Convention, MSNBC host Rachel Maddow took a moment to talk about how a key element of the speech’s presentation made her afraid that a lot of old people are gonna end up being killed by COVID-19 as a result.

Pence’s speech, delivered live from Fort McHenry in Baltimore (also known as the setting for “The Star Spangled Banner”), was notable for its contrast with the almost audience-free speeches made by the leading Democrats during last week’s DNC. He spoke in front of an audience composed mainly of older veterans and political supporters who were, notably, not remotely socially distanced, and the majority were not wearing masks. Complicating matters, according to MSNBC, team Trump didn’t actually conduct coronavirus testing on the attendees prior to the speech.

That aspect of it was what set Maddow off as MSNBC began its post-convention coverage immediately after Pence’s speech. Maddow said the event made her think of Trump’s divisive political rally in Tulsa last June, during which several Trump supporters were infected with COVID-19, including Herman Cain, who died just over a month later.

“This felt like a long night, I mention in part because the speeches were so long, including Mike Pence’s,” Maddow began. “And while that wouldn’t usually matter to me that much they did go out of their way to showcase the fact that this is an event with an audience. And our reporting suggests that there was not universal testing of everybody who was invited to this event. And to have so many elderly veterans and otherwise elderly people in this audience not sitting socially distanced, the vast majority of them not wearing any masks, for this to go on for a very long time including a lot of chanting and shouting, I just, I feel concern for what’s happening here.”

“Especially after what happened at the Tulsa rally and other Trump events when they have gone out of their way to try to portray, to try and show a visual image of the world and a country that’s gotten past the COVID threat when we really haven’t,” she continued. “I know politically why they want to do that, but this is potentially a dangerous situation, even an outdoor setting, for all these elderly veterans.”

“It’s particularly striking across the backdrop of Mike Pence, who led the coronavirus task force, maybe still does if it still exists, talking about how an ‘untold number of American lives were saved’ by President Trump’s actions. Well, there’s over 180,000 Americans dead, and maybe you feel good about that number, maybe you feel like that’s success,” Maddow added. “But over 180,000 American families have been destroyed by the loss of a loved one, and all they’re talking about with COVID is how it’s over, and how they did great, and by the way, implicitly, there’s no reason for anybody here to be distanced or wearing a mask or to have been tested.”

“For this to come on the day that we learn the new CDC guidelines that just came out, that said ‘you don’t have to get tested if you’ve been exposed to somebody whose positive,’ we learned that those guidelines were not actually devised by the CDC,” — this is true, by the way — “they were from the Trump administration and imposed on the CDC, it’s just, it’s unnerving.”

“It’s unnerving at a health level, I feel like we’re watching chronicles of a death foretold here,” Maddow concluded.

Watch the clip of Maddow’s remarks below: