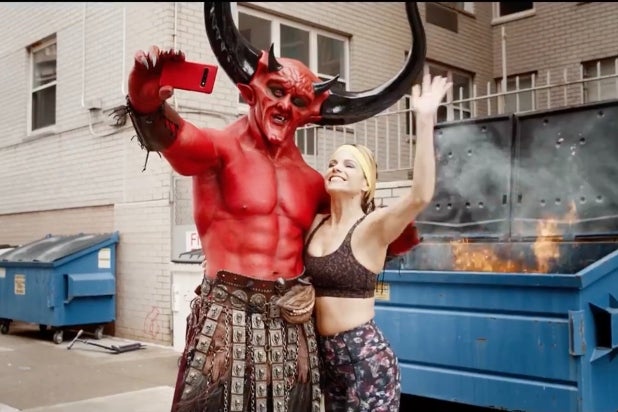 Satan and 2020 are a perfect match in a new ad for dating website Match.com, the result of a unique collaboration between actor Ryan Reynolds and pop artist Taylor Swift.

From Reynolds’ Maximum Effort production company, the commercial plays out like any other app-date between two people who hit it off right away — except those people are the devil himself and the year in which we currently live, if it took on the form of a small brunette woman with grown-out highlights and a taste for athleisure.

Together, they bask in the slow crumbling of society, stealing toilet paper from public restrooms, watching movies in an empty theater, and soaking up all the fun of a deserted football stadium in pandemic-ravaged America.

Their soundtrack is Taylor Swift’s 2008 smash-hit “Love Story.” You know the one — it starts out like “we were both young when I first saw you” and follows the story of a modern-day Romeo and Juliet if they lived in a small town and miraculously did get her father’s permission to marry. But this recording isn’t exactly like the one we’ve been hearing on the radio for 12 years.

It’s the first song of many that Swift vowed to re-record as part of her ongoing battle with Scooter Braun, who bought Swift’s Big Machine catalog in June 2019. Starting with “Love Story,” the mega-star is cutting new versions of all of her first five albums.

“Okay so while my new re-records are NOT done, my friend @VancityReynolds asked me if he could use a snippet of one for a LOLsome commercial he wrote so…here’s a sneak peak of Love Story! Working hard to get the music to you soon!!” Swift tweeted on Wednesday.

For his part, Reynolds tweeted, “A match made in hell is still a
@match.”

Watch the cheeky commercial below.