An eye-rolling tease and a sigh of relief define Episode 6, “Decoherence” — a drawn-out hour of due diligence on behalf of writers Suzanne Wrubel and Lisa Joy, where characters do what they must to set up what’s next while slogging through the pedestrian tasks of the present. Maeve (Thandie Newton) is resurrected, as we all knew she would be; William (Ed Harris) sorts his demons and is set free; Charlotte/Dolores 2.0, meanwhile, gets the most development and the most to do — obeying Dolores Prime’s directives by saving Delos’ designs from its new owner, Serac (Vincent Cassel) while still committing to the family she shouldn’t care about, only to lose them anyway — and Tessa Thompson again makes the most of it.

Aside from the affecting action driven by Clonelette Hale (formerly known as Robo-Hale), the other arcs are important but simple; more than anything, they’re designed to move things along, and in a transitionary episode like this, so much comes down to expectation: What have the necessary but uneventful machinations filling Episode 6 done to build excitement for Episode 7 (and beyond)? The big question heading into next week is: Who did Maeve manage to resurrect? Who will help her defeat Dolores? Who will be the gladiators in this much-hyped battle royale?

But after sitting through another meaningless cavalcade of guest stars this week, it’s hard to get too excited for one more reveal next Sunday. (Honestly, I hope Maeve brings back Jonathan Tucker’s Major Craddock, just to fuck with William.) Thankfully, “Westworld” preserved its most enticing storyline: Clonelette’s. Given the most active role, the most compassionate arc, and handling the action sequences with arresting tenacity and style, Clonelette’s development from a confused host, to Dolores’ clone, to a loving family member has been one of the more curious storylines to track. Clearly, she’s not strictly adhering to Dolores’ wishes, even though she is Dolores, which may not make a lot of sense, but does make her all the more surprising as continues to gain confidence and agency. Clonelette has genuine internal conflict more than a simple directive, and all her wants played out to a chaotic crescendo in Episode 6.

So when her getaway car was blown sky high with Clonelette, her son, and her ex inside, it felt, at first, like “Westworld” pulled the wrong rip-cord. Why kill off the most interesting character? Well, they didn’t; they only gave her further motivation. If the charred remains of Clonelette Hale crawling out from the fiery wreckage of her briefly united family wasn’t enough to piss her off, her newfound attachment to the recently deceased should get her good and angry, too. Where she channels that energy remains to be seen — she’s gotta be mad at Dolores for sending her on a suicide mission, though it appears Serac was behind her family’s deaths — but we know the Clonelette can fend for herself, making her a powerful enemy and ally to anyone who crosses her path.

Unfortunately, for every sage decision the “Westworld” team makes for Clonelette, they make an equally terrible one for Maeve — even when they’re of a similar vein. Episode 6, “Decoherence,” opens with Maeve randomly choosing to fight a bunch of Nazi soldiers. Did she need to? Of course not! Was it cool? Not really! She barely dispatched a few of them with some rather routine moves before “Westworld” cuts to its title sequence. Meanwhile, Clonelette gets to end the episode with an extended action scene that illustrates her wit as much as her might. She waits until killing is her last resort, then snaps that dude’s neck and hides the body! She doesn’t go for the gun in the meeting, instead letting Serac’s handlers gas themselves. Then she goes toe-to-toe with a guard in an enclosed space, with Thompson going off and director Jennifer Getzinger finding just the right framings to elevate the action.

In short, Clonelette isn’t just getting more to do than Maeve; what she does has more meaning. Just look at Maeve’s season: She started in WarWorld, broke out, learned about Serac, fought a clone version of Dolores, lost, and now… she’s back in WarWorld again? And again, she has no reason to be there? Yes, this was how the show decided she could go about recruiting help for her impending battle with Dolores, but there’s nothing in the oft-rewritten “Westworld” playbook that required her to be there. 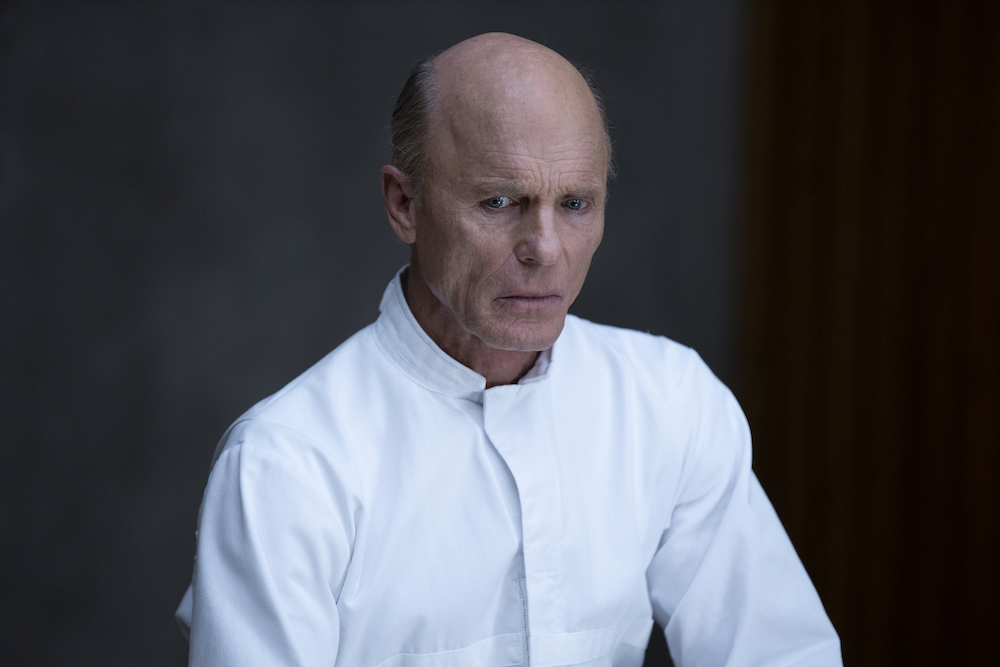 Would it not have been just as satisfying, if not more so, to see a reanimated Maeve rushing through the Delos labs, scooping up her allies’ pearls, dodging gunfire from the Charlotte Hale version of Dolores and the looming limbs of her Big Red Machine? Why is Maeve, once the most exciting and active character in “Westworld,” now repeatedly relegated to piddling around in a virtual world? Her journey this season is playing out like a video game where if you lose to the Big Bad, you just start over.

That leaves us with William — what’s to say about William? While it’s exciting to think of the onetime “Westworld” ruler/oppressor/maniacal killer squaring off in a do-or-die death-match with his oldest foe, I don’t buy the whole “kill the past” ideology under this application. William had to move on to become an active character again (there’s only so long we can watch him talk to ghosts, and that limit was surpassed long ago), but I don’t buy him as “the good guy,” and even if we’re not supposed to believe he’s going to end up on the right side of things, his episode-long Ebenezer Scrooge routine didn’t earn its time. Seeing Tucker, Jimmi Simpson, and more old faces served as a pleasant enough distraction, but all he did was decide to move on from his past to confront the future; it’s not a revelation, and it’s not powerful motivation for what’s to come.

So, what is to come? With four episodes left, quite a bit — here’s hoping future entries provide more enticing questions, more convincing answers, or, at the very least, more Tessa Thompson kicking ass.