‘Amazing’ nurse, 68, becomes the first Marie Curie worker to die from coronavirus after more than 40 years caring for people at the end of their lives

A nurse who spent more than four decades caring for those at the end of their lives has died from coronavirus.

Barbara Sage, 68, became the first Marie Curie worker to fall victim to the killer big when she lost her battle in intensive care on Sunday.

While the mother-of-two had held the hands of her dying patients over the years, her own family were denied this option in her final moments.

She was employed as a senior healthcare assistant in Bromley, south-east London, and had worked for Marie Curie for the last 14 years after joining in 2006. 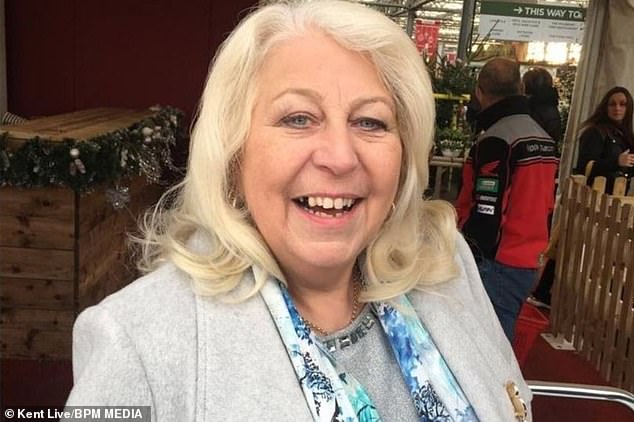 Barbara Sage, 68, pictured, became the first Marie Curie worker to fall victim to the killer big when she lost her battle in intensive care on Sunday

Her daughter, named only as Donna, said: ‘Mum always said her job wasn’t about the getting paid, it was about being there for people when they need it.

‘It was about being caring and kind and giving people your time.

‘She wouldn’t just get up and leave at the end of her shift.

‘She’d stay on to support the families or wait for the coroner if needs be.’

Barbara, who was also a grandmother, was described as a ‘very warm person’ and had started out her career as an ambulance driver in London, aged 18.

‘She was dedicated to caring for people,’ her daughter added.

Barbara’s manager Adebusola has spoken about the kind of nurse Barbara was.

She said: ‘If ever Barbara was off and we needed cover for a shift, she’d say ‘if the patients need me, I’ll be there’.

‘That was Barbara all over, patients first. There was one time that has always stuck with me that showed how loving and dedicated she was.

‘There was a patient who was dying in Bromley. His wife, who was his main carer, was taken ill and had to go into hospital. They also had a disabled son with Downs syndrome living with them.

‘Barbara was incredible. She made some calls and got the patient into the local hospice so he could be well looked after.

‘She waited with him to be taken in – because she was worried what would happen if the son was left alone with his dying father.

‘Then she stayed at home with the son, cooked him breakfast and looked after him and comforted him until the social worker arrived.

‘She’d started her shift at 10pm the night before, and she left the family’s house at 1pm the next day.

‘She hadn’t slept, she was amazing and if that’s not kindness and dedication then I don’t know what is.’

Matthew Reed, chief executive of Marie Curie said: ‘Barbara’s death is a devastating loss for the whole Marie Curie team, and I know everyone who worked with Barbara over the last 14 years can attest to her professionalism and commitment.

‘I know she will be very greatly missed.

‘I’ve spoken to Donna who told me how her mother had spent all her life as a palliative care nurse, holding the hands of dying people and hugging their loved ones.

‘She told me how she and the rest of the family couldn’t hold Barbara’s hand as she was dying. They couldn’t hug her goodbye.

‘This pain is something that so many families are having to go through right now.

‘My thoughts are with Barbara’s family and friends, as well as everyone who is grieving a loved one in these incredibly difficult times.’

Barbara’s partner Gerald, her children Donna and Aaron, and her five grandchildren plan to celebrate Barbara’s life at a memorial later in the year, Marie Curie has said.