This is the shocking moment an armed gang opened fire with handguns outside a chicken shop in a broad daylight shooting.

Thugs fire their weapons as they run at another group who run away from them, ditching a bicycle as they scatter.

The armed gang then pile into a car in a clip thought to have been taken in the West Midlands yesterday.

Birmingham resident Anwar Afzal shared the footage on Facebook, saying that the video was shot in Handsworth.

Hooded males are seen running across the street brandishing weapons and smoke rises from a gun as it is fired.

Pictured: The gang brandish firearms in the street in Handsworth, Birmingham, yesterday 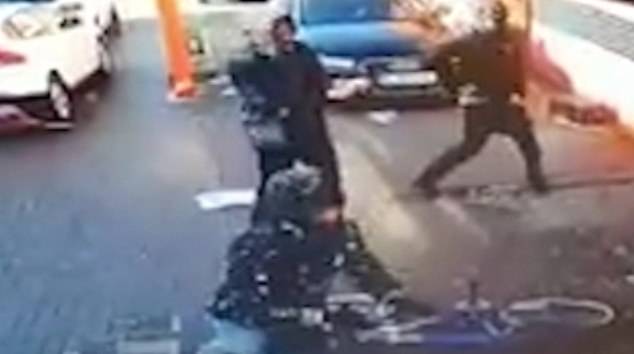 The gang are pictured in Handsworth, Birmingham, where they fired guns outside a chicken shop in the West Midlands

They then flee to scene in a blue car which is parked opposite the DFC Chicken takeaway.

The victims appear to have taken refuge in the eatery, as CCTV taken from inside shows a group of males sheltering behind the counter.

Workers appear frightened as they see the group leap over the counter and duck to the floor. 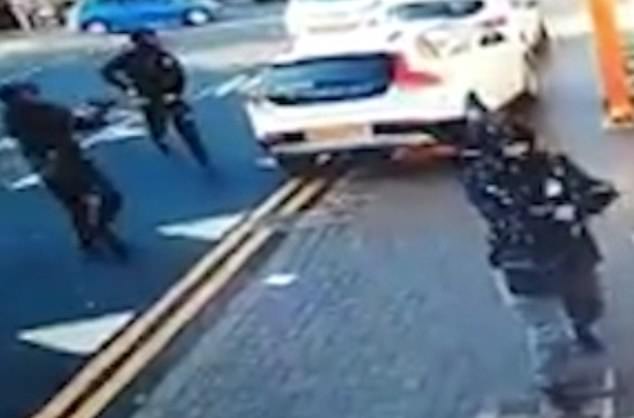 The armed gang’s car is seen leaving the scene slowly, driving past the takeaway after the incident.