The bodies of more than 200 children were found buried beneath what was once a former school in British Columbia used to assimilate Indigenous students.

Chief Rosanne Casimir of the Tk’emlups te Secwépemc First Nation called the discovery an “unthinkable loss that was spoken about but never documented at the Kamloops Indian Residential School,” once Canada’s largest residential school. The site is about a four-hour drive northeast of Vancouver.

Some of the 215 bodies were of children as young as 3 years old.

The remains were confirmed last weekend with the help of ground-penetrating radar but the bodies have not been exhumed. More bodies may be found as the school grounds continue to be searched, Casimir said.

More than 150,000 Indigenous children were taken from their parents between the 19th century and the 1970s and brought to government-funded residential schools in an effort to make them part of Canadian society. They weren’t allowed to speak their native languages or practice their culture and were forced to convert to Christianity.

“The pain that such news causes reminds us of our ongoing need to bring to light every tragic situation that occurred in residential schools run by the Church,” Archbishop J. Michael Miller of Vancouver said in a statement, according to The Washington Post. “The passage of time does not erase the suffering that touches the Indigenous communities affected, and we pledge to do whatever we can to heal that suffering.”

Many of the children faced neglect and physical and sexual abuse and as many as 6,000 died at the schools, according to The Associated Press. 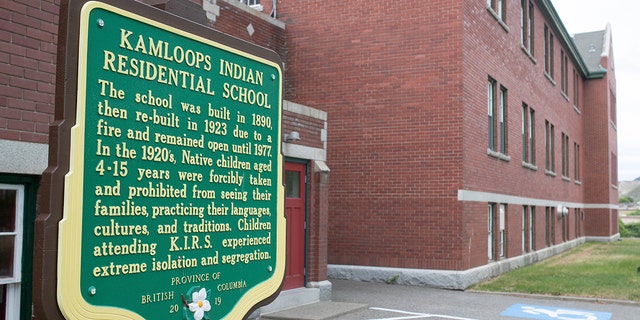 A plaque is seen outside of the former Kamloops Indian Residential School on Tk’emlups te Secwépemc First Nation in Kamloops, British Columbia, Canada on Thursday, May 27, 2021. The remains of 215 children have been found buried on the site of the former residential school in Kamloops.  (Associated Press)

Canada’s government apologized in 2008, admitting the abuse was rampant. The government has also paid billions of dollars in compensation to residential school survivors, The Post reported.

A report more than five years ago by a Truth and Reconciliation Commission said at least 3,200 children had died amid abuse and neglect, and it said it had reports of at least 51 deaths at the Kamloops school alone between 1915 and 1963.

“This really resurfaces the issue of residential schools and the wounds from this legacy of genocide towards Indigenous people,” Terry Teegee, Assembly of First Nations regional chief for British Columbia, said Friday.

“The news that remains were found at the former Kamloops residential school breaks my heart – it is a painful reminder of that dark and shameful chapter of our country’s history,” Canadian Prime Minister Justin Trudeau tweeted on Friday. “I am thinking about everyone affected by this distressing news. We are here for you.”

Investigators will likely attempt forensic techniques once the bodies are exhumed to try to identify the children and return them to their families and communities, The Post reported.

Experts say other mass graves may be found at other former residential school sites across the country.