Christchurch: White supremacist New Zealander Philip Neville Arps has been arrested while visiting a home brew shop next to a mosque for allegedly breaching the strict conditions of his prison release.

Arps, 45, was jailed for 21 months last year after he sent the banned video of the Christchurch terror attack to 30 people, and asked a friend to modify it by adding cross-hairs and a “kill count”.

He was released in January, but remains subject to strict conditions prohibiting him from going near any mosques in New Zealand or having contact with anyone in the Muslim community. 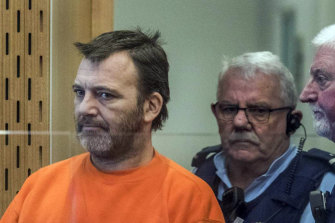 Arps was arrested in Christchurch on Tuesday morning after he was allegedly spotted near the Linwood Islamic Centre, where seven people were killed in last year’s attack.

He appeared in the Christchurch District Court on Tuesday afternoon before Judge David Saunders.

He was charged by the Department of Corrections with breaching his release conditions by allegedly loitering near a mosque. 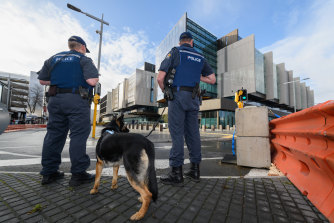 Police dog handlers are seen in front of Christchurch High Court prior to the sentencing hearing of Brenton Tarrant on Tuesday.Credit:Getty Images

Arps’ arrest comes as the 29-year-old Australian white supremacist who fatally shot 51 people and injured 40 others on March 15 last year is sentenced.

Security has been beefed up for Brenton Tarrant’s four-day sentence hearing at the justice and emergency services precinct, with armed police outside the building in the central city and a sniper stationed on the roof.

It’s understood police have visited a number of high-risk individuals, some with known ties to white supremacy, in the city and other parts of the country in recent weeks. They’ve been closely monitoring discussions on online forums and message boards.

Shortly before Arps’ release in January, the Department of Corrections applied to have additional release conditions imposed because of concerns about phone calls and dozens of letters he'd written while in prison. The content of the phone calls and letters has been suppressed by the court.

The judge said Arps' letters and phone calls had clearly demonstrated “an extreme dislike if not hatred for the Jewish and Muslim community”.

There was also clear evidence Arps was thinking about ways to get around his release conditions, which prohibited use of the internet, and he had demonstrated a lack of respect for the court and any orders made by the court, the judge said.

“[Arps'] continued references to violence, killing, weapons, revenge, vengeance, striking back and hatred of certain ethic groups in the time leading up to his release are both concerning and disturbing. This is a matter that clearly increases the risk of reoffending when released from prison and demonstrates the need to provide for the interests of his victims.”

Meanwhile, former National Front leader Kyle Chapman was spoken to by police after joining a protest outside the justice precinct on Tuesday. The protesters have been touting conspiracies about the terror attack.

The National Front is a white nationalist group, but Chapman told Stuff he was not a white supremacist.

He opposed the gunman's views and supported the victims, he said.

“His manifesto doesn't even make sense; I've read it twice. It has heaps of inconsistencies in it and contradictions.

“I'm here in support of justice, and I support all these people – I believe that everyone who suffered a loss has to get their say.”

Police said they recognised and respected the lawful right to protest. Their increased security was “for the safety and security of all”.