Coronavirus deaths are TWICE as high in poor areas of England and Wales: Official figures show London boroughs of Newham, Brent and Hackney have the worst COVID-19 fatality rates

People living in the poorest parts of England and Wales are dying from coronavirus at more than double the rate of those in affluent areas, shocking figures show.

An Office for National Statistics report found the most deprived regions suffered 55 deaths per 100,000 people, compared with 25 deaths in the wealthiest areas.

London, the heart of Britain’s outbreak, had the highest mortality rate, with 85.7 deaths per 100,000 people – more than double the national average of 36.2 fatalities.

The boroughs of Newham, Brent and Hackney were the three worst-hit regions in all of the country, suffering 144, 142 and 127 deaths per 100,000, respectively.

Boroughs in the capital accounted for all of the top ten worst hit local authorities, the report showed.

Hastings, in affluent East Sussex, and Norwich had the lowest COVID-19 death rates – suffering six and five deaths per 100,000, respectively. 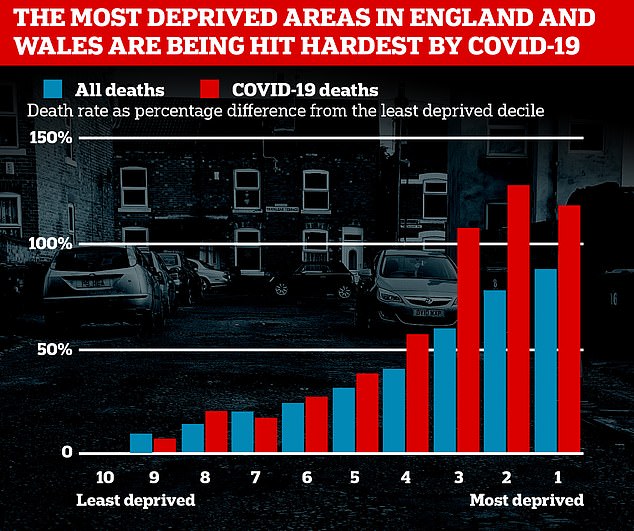 People living in the poorest parts of England and Wales are dying from coronavirus at more than double the rate of those in affluent areas, shocking figures show

Experts say those living in poverty smoke and drink alcohol more, and are more likely to be obese – all of which increase the likelihood of chronic health conditions.

Patients with pre-existing health troubles struggle to fight off COVID-19 before it becomes life threatening.

And poor people are also more likely to use public transport more often and live in crowded houses – driving up their chance of catching and spreading the virus.

The second worst-hit area behind London was the West Midlands, where the death rate is 43.2 per 100,000.

The report analysed 20,283 virus deaths registered in England and Wales by April 17.

It also found the fatality rate is six times higher among those living in major cities than in rural areas.  No rural area had a death rate higher than 21.9.

General mortality rates are normally higher in more deprived areas, the ONS said, but so far COVID-19 appears to be pushing the rates even higher.

Nick Stripe, Head of Health Analysis, Office for National Statistic, said:’By mid-April, the region with the highest proportion of deaths involving COVID-19 was London, with the virus being involved in more than 4 in 10 deaths since the start of March.

‘In contrast, the region with the lowest proportion of COVID-19 deaths was the South West, which saw just over 1 in 10 deaths involving coronavirus.

‘The 11 local authorities with the highest mortality rates were all London boroughs, with Newham, Brent and Hackney suffering the highest rates of COVID-19 related deaths.

‘General mortality rates are normally higher in more deprived areas, but so far COVID-19 appears to be taking them higher still.’

It comes after Oxfam warned the coronavirus pandemic could push half a billion people globally into poverty.

A report from the Nairobi-based charity last month looked at the impact the crisis will have on global poverty by shrinking household incomes and consumption.

The report found the world would be far worse hit than after the 2008 financial crisis.

It said: ‘The estimates show that, regardless of the scenario, global poverty could increase for the first time since 1990.’

The report added this could mean some countries revert to poverty levels last seen three decades ago.