Ex-student nurse, 27, is jailed after bombarding emergency services with 672 fake calls in 13 months

A court heard that Sharna Dixon’s ‘persistent and sustained’ 672 emergency and 101 calls left HM Coastguard alone with a staggering bill of £350,000  in just over a year.

Her actions led to them being called out to her almost every week, and made up 35 per cent of all responses in that time by the volunteer lifeboat team on the Isle of Sheppey in Kent.

The financial impact of the 27-year-old’s behaviour on Kent Police was also said to run ‘well into hundreds of thousands of pounds’, and her calls cost the South East Coast Ambulance Service just under £94,000.

A psychiatric report concluded that Dixon continues to ‘see herself as a victim of her circumstances’ and refused to take responsibility for her behaviour.

Emin Kandola, defending, said the trigger for Dixon’s behaviour was giving birth to a stillborn child on a beach when she was 19 and unaware she had even been pregnant. 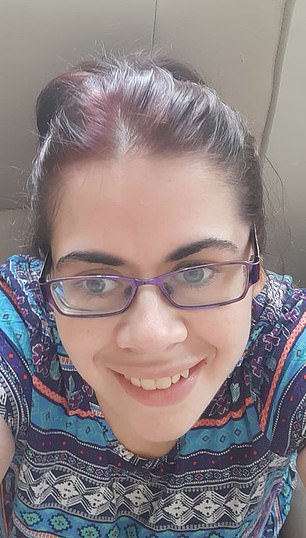 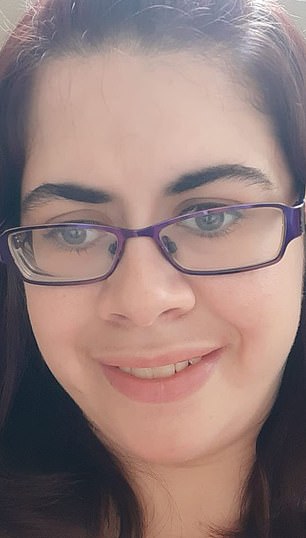 Sharna Dixon, 27, from Sheerness, Kent, pictured, was jailed for two years after admitting assaulting a police officer and making hundreds of fake emergency calls – including taking 125 ambulance trips to hospital 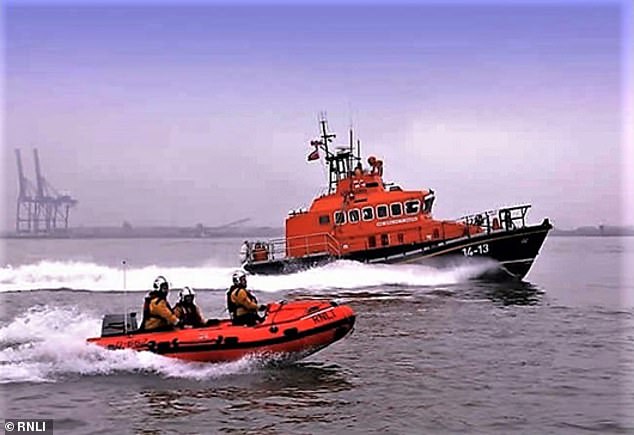 Dixon was responsible for more than a third of the emergency call outs made by the RNLI and coastguard in Sheppey Island, Kent

In one year alone she arrived at the A&E department at Medway Maritime Hospital in Gillingham by ambulance approximately three times a week, but never needed treatment lasting more than a few hours.

A judge said that although the total bill to the three emergency services was ‘eyewateringly’ in excess of £500,000, the cost was more in terms of hours spent dealing with her and the impact on the wider community.

The former nursing degree student would repeatedly ring police saying she felt suicidal, or threatening to drown herself or self-harm.

However, the calls were made more for attention than in a genuine emergency, Maidstone Crown Court, Kent, heard on Monday.

A probationary police officer sent to assist her during one incident in September last year ended up being pushed by Dixon into a canal, suffering a wrist fracture which required surgery, as well as bruises and grazing.

It was alleged that she had even filmed one of her rescue operations and later posted it on social media. 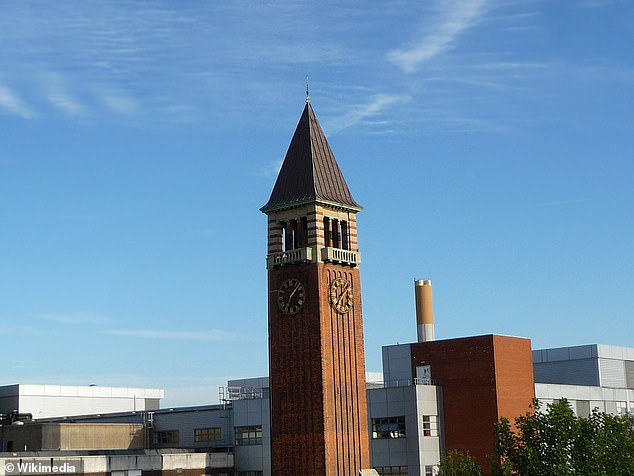 She was also brought 125 times by ambulance to Medway Maritime Hospital, pictured,

Dixon disputed this however during her sentencing hearing for causing grievous bodily harm to the officer, and persistently sending false communications to cause annoyance, inconvenience or anxiety between November 2017 and February this year.

Judge Julian Smith jailed her for 15 months for GBH, three months consecutive for the malicious communications offence, plus 180 days also to be served consecutively for breaching a suspended sentence.

‘What is apparent is that you have made so many calls that the impact on individual services is very significant,’ he told Dixon, who appeared via video link with Bronzefield Prison in Middlesex.

‘The coastguard has been called out numerous times and you constituted 35 per cent of all calls to them.

‘There is a 131-page report produced by police regarding your contact. That is extraordinary.

‘The hospital visits – 185 in one year and 125 by ambulance. That is a profound impact on services and on others who may have a greater need for an ambulance.

‘The costs you have incurred are eye-watering.’

Prosecutor John Crawford detailed the ‘significant involvement’ from the authorities as a result of her calls.

‘Since October 2018, the coastguard has responded to 67 incidents involving the defendant, approximately once a week,’ he told the court.

‘The majority have been in and around the Isle of Sheppey but also the wider East Kent area.

‘Ms Dixon was responsible for 35 per cent of all call-outs of the Sheppey island lifeboat and coastguard rescue teams, and up until January 2020 the total cost of responding to her call-outs to the coastguard alone had been £350,000.’

The court also heard that Dixon’s involvement with Kent Police during the same period was as much as ‘a few times every week’.

One police community support officer who had as many as 80 dealings with Dixon during call-outs, face-to-face meetings, and visits to her family said in his report for the court: ‘Hundreds of police hours were spent dealing with her.

‘The cost is well into the hundreds of thousands of pounds, and other people in the community would have had their police response negatively affected.’

The court also heard that there were 473 ambulance requests resulting from Dixon’s calls between January 2019 and February this year, costing the service £93,654.

It was alleged that during one incident at Warden Bay in Sheerness, Kent, Dixon would not cooperate with those trying to save her and even filmed the rescue taking place.

However, having earlier in proceedings told Judge Smith she was ‘really not a bad person’, Dixon denied this, claiming the video had been recorded and shared online by a member of the public.

The police officer injured on September 27 last year had been called to an area by Sheerness Canal after Dixon had again called police telling them she felt suicidal.

However, she became ‘agitated, aggressive and distressed’ and began pushing out, said the prosecutor.

‘They were near the edge of the canal and in the course of this pushing, the officer lost his balance, was unable to steady himself on the uneven ground, and ended up falling into the canal,’ added Mr Crawford.

‘He put his arm out to break his fall which resulted in him fracturing his wrist and needing surgery.’

She was eventually charged with the malicious communications offence – which carries a maximum prison term of six months – after another search operation involving police and the coastguard had been mounted on February 15 this year. 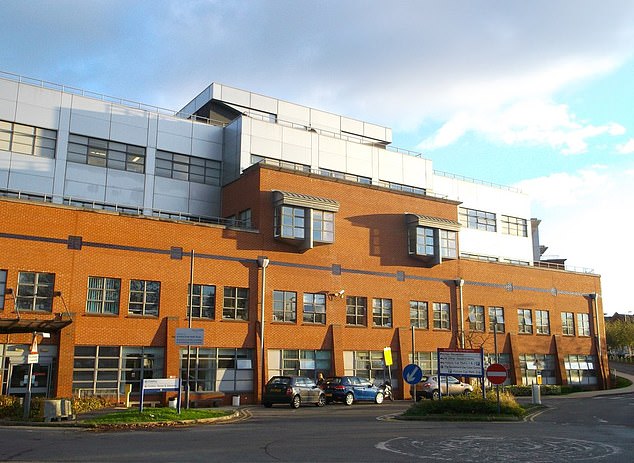 The court heard Dixon made 473 ambulance requests which cost almost £100,000 and was taken by ambulance to the A&E department of Medway Maritime Hospital in Kent on average three times a week

The court heard Dixon threatened in a 999 call to drown herself before the phone line disconnected.

She was eventually found ‘on the wrong side of railings’ at Margate Harbour in Kent, and told police her call had ended because her phone had run out of charge, said Mr Crawford.

Dixon, who went on to work in a care home after failing to complete her university studies, also claimed there were no other services she could have called for help.

At a previous hearing last week, Judge Smith told Dixon, from Sheerness, that had she been charged with a public nuisance offence her sentence could have been as much as seven years.

‘No one can ever be prevented from calling the police but if they continue to persistently require their services for no good reason they become a public nuisance and punishment can be very severe indeed,’ he said.

‘The total cost of those persistent phone calls, never mind the extraordinary number of hours, was huge, and the impact on services available to others was extremely significant. 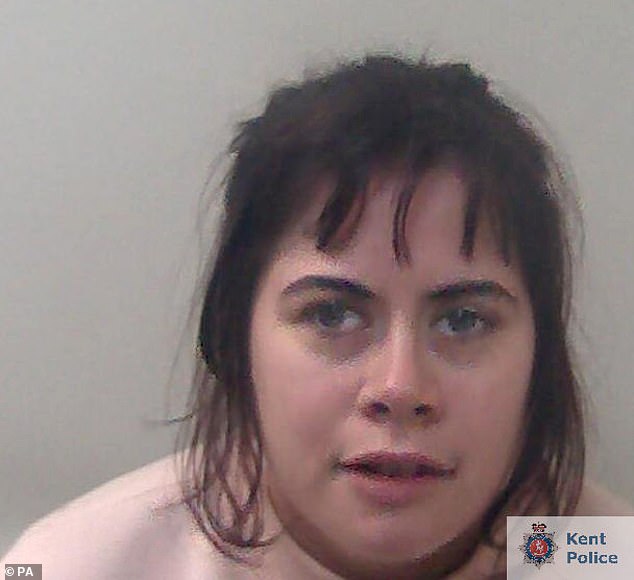 Dixon, pictured, cost the emergency services more than £500,000 with her repeated calls

‘We are talking at least half a million pounds worth in financial costs and rather more in the sense of time.

‘It is apparent from the sheer volume of calls to the coastguard, ambulance service and police that this was excessive.

‘These were inappropriate, malicious and false calls, and an absolute clear case of the misuse of the emergency call system.’

Miss Kandola also told the court that the push on the officer at the canal resulted from a ‘reckless’ swing of her arm when she became startled by his presence.

The court heard the offence was committed within weeks of Dixon having been handed a 210-day suspended sentence for two offences of possessing a bladed article and one of assault.

The knives were discovered by police while responding to emergency calls made by Dixon while she was at a coastal park and a beach in May and August last year.

A decision on whether Dixon should be made subject to a two-year criminal behaviour order banning contact with the emergency services unless for ‘genuine’ reasons will be made at a separate hearing on July 3.

Any breach could result in a maximum prison sentence of five years.