A friend of the woman who accused Christian Porter of rape is threatening to sue the federal Liberal minister for defamation, a day after he agreed to drop his own defamation case against the ABC.

Jo Dyer, who won a court order last week to prevent Mr Porter’s high-profile barrister Sue Chrysanthou, SC, acting for him in his defamation case against the ABC, said in a statement on Tuesday that her lawyers had issued two defamation concerns notices to Mr Porter “in relation to his continuing defamatory comments of me”. 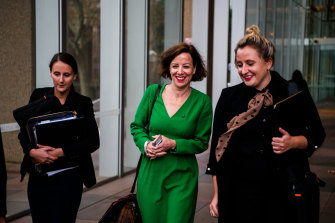 “This afternoon Marque Lawyers sent a second concerns notice to Mr Porter. He should be on notice that if I [emphasis in original] launch legal proceedings, I tend to see them through to their conclusion.”

Ms Dyer met the woman who would later accuse Mr Porter of rape when they were teenagers, in the late 1980s.

Ms Dyer told the Federal Court during her bid to stop Ms Chrysanthou from acting for Mr Porter that she did not have contact with the woman from the early 1990s until August 2019, when they reconnected in Adelaide, and it was at this point she was told of the allegation against Mr Porter.

She told the court she believed her friend. Mr Porter strenuously denies raping the woman in 1988, when they were both teenagers. The woman took her own life last year.

Ms Chrysanthou had advised Ms Dyer in relation to a separate defamation matter from November last year into the early months of this year.

Federal Court Justice Tom Thawley ruled last week she could not act for Mr Porter in his defamation proceedings against the ABC because of the potential risk of misuse of confidential information acquired from Ms Dyer.

Ms Dyer said in a statement on Tuesday that Mr Porter had implied in a statement on May 12 that her court bid to stop Ms Chrysanthou acting for him was “part of an improper last-minute legal strategy to disrupt his now discontinued action” against the ABC and journalist Louise Milligan.

“He did this despite knowing the real reason for the court action, and the lengths to which I had gone over the preceding two months to avoid court,” she said.

Mr Porter said in a statement at the time that Ms Dyer took action “shortly before court appearances on significant issues” in the ABC defamation proceedings, and “I am therefore concerned about the timing of this application”.

Ms Dyer also objected to allegations by Mr Porter that she had been “coached” by Milligan to destroy communications between them that may have had a bearing on his proceedings against the ABC.

“This is absurd. As I stated in court under oath, a number of people, of whom Ms Milligan was but one, encouraged me to treat all communications about our dear friend Kate, and the allegations she made against Mr Porter, with the care and respect she and they warranted,” she said.

“I endeavoured to do so by both filing and deleting correspondence between me and other individuals as appropriate. There was nothing improper, illegal or sinister in my decisions to save or delete certain messages, decisions that were taken well before Mr Porter launched his now discontinued action against Ms Milligan and the ABC.”

Ms Dyer said “despite stating earlier that he would exercise the opportunity to give evidence denying Kate’s allegations on oath, Mr Porter chose to discontinue his action against Ms Milligan and the ABC and thus denied himself the opportunity to do so”.

“The allegations Kate made against the former attorney-general remain completely untested. Until they have been investigated, it is untenable for Mr Porter to remain in cabinet.″⁣

Mr Porter was contacted for comment via his lawyer.

Our Breaking News Alert will notify you of significant breaking news when it happens. Get it here.