YANQING, China — Charlie Volker has spent most of his 24-year-old life seeking out competition wherever he can find it. He played half a dozen sports growing up, and two in college. He took up CrossFit afterward. But all along, at heart, he’d been “a football guy,” and so, at this time two years ago, he was an NFL hopeful.

He had a Princeton degree but no interest in a desk job.

He’d been an all-conference running back, and received an invite to an NFL rookie minicamp, and wanted one more shot.

It was a long shot. He understood that. But he chased it, and chased it, until the pandemic came along and effectively canceled it, and, “Sh*t,” Volker thought.

So he gave up the chase and decided to become an Olympian.

He is here in Beijing as a bobsledder. Eighteen months ago, he’d never been down a bobsled track. But he had linear speed and power, and a background that USA Bobsled and Skeleton has increasingly sought.

One of Volker’s teammates recently explained it to some counterparts from the Netherlands: “We’re former football and track athletes that were good, but not good enough to go pro, and we're mad about it.”

“And I fit into that category,” Volker says. “That perfectly describes me.” 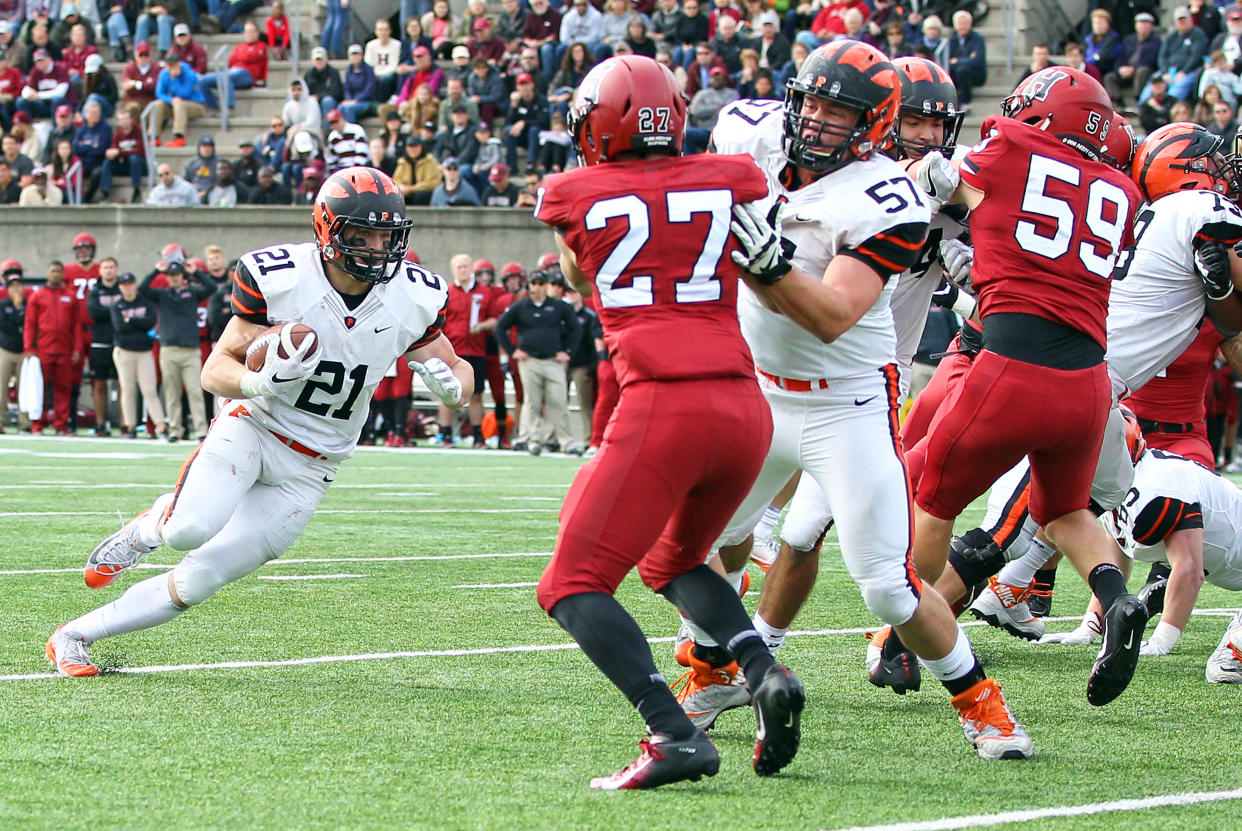 For years, U.S. bobsled officials have invested in a concept they call “talent transfer.” It’s a belief, as U.S. Olympic and Paralympic committee high performance director Scott Riewald says, “That there's so much untapped talent here in the United States, athletes who have tremendous physical skills, and developed attributes, physiologically, mental, physically, that could contribute to having success in an Olympic sport.”

And there is perhaps no more common talent transfer pipeline than football or track to bobsled. Volker, who was both a sprinter and running back in college, was a “natural fit.”

His lack of lateral quickness kept him away from the upper reaches of FBS football, and then from the NFL draft. In early 2020, he clung to football dreams, and day after day, he pursued them. He held a pro day. He eyed minicamps again.

Fortunately, one of the men helping him train was a former bobsledder who recognized that Volker might be in the wrong sport.

Minicamps were then canceled due to COVID-19. Volker grew impatient. “When football was out the window,” he says, “I was like, ‘I need something.’”

At the suggestion of his trainer, he turned to a different type of scouting camp. He uploaded videos — sprints, jumps, athletic highlights — through GMTM, an athlete exposure platform, to USA Bobsled and Skeleton’s digital combine. Before long, he got a call from a USABS coach inviting him to an in-person tryout.

And although his NFL ambitions still lingered, he accepted the invite — because, as he says, “I was champing at the bit to try and go use my athleticism somewhere.”

Bobsled is not for the faint of heart. “It's like getting put in a trash can and thrown down a double black diamond,” Volker’s teammate, Josh Williamson, says. Volker’s first time on ice was in October 2020, and “it was like being in a washing machine,” he says. “Got out of the sled, and I think I almost fell down the ice back on my butt, because I was so dizzy.”

“We've had some world-class athletes that have come out and said, ‘This isn't really for me.’”

Volker wasn’t one of them.

His talent transferred almost immediately. He took to the simplistic side of the sport. “I don't have too much interest in the specifics,” he says of bobsled. He leaves those to his sled’s pilot, Hunter Church. “I just love pushing,” Volker says, and that, plus “getting in the sled and riding low” is all he must do.

It got him to the national team, and to the World Cup circuit, and now to the Olympics, where he’ll compete next week. He departed for Beijing not even knowing how he’d watch the Super Bowl here, fully immersed in his new sport.

“I wanted to be the best in the world at something,” he says. “And now I have the opportunity to do that, which is really cool.”