A 120-tonne bridge has fallen from a crane with chunks of debris falling onto the street and crushing a truck below.

The incident took place in Regent Street, Leeds as contractors worked on the A64 bridge replacement works that will see a new £31million flyover installed in the city centre.

It is understood the huge structure was being moved by a crane yesterday evening when it came crashing to the ground and leveled a large truck below it.

It is not yet known if anyone was injured in the incident.

The Regent Street Inner Ring Road had been closed since yesterday evening for ‘bridge demolition works’. 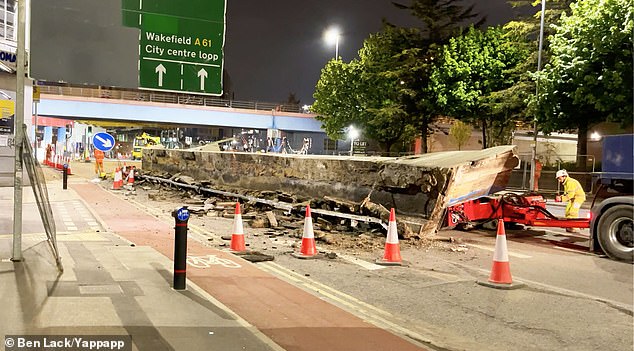 It is understood the 120-tonne bridge was being moved by crane when it came crashing to the ground and crushed a large truck below. Pictured: The scene in Regent Street, Leeds last night 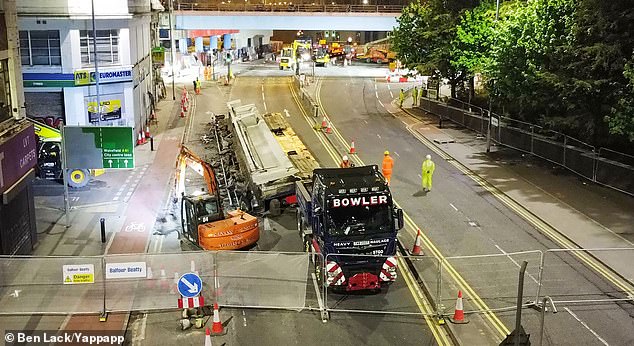 An eyewitness explained to LeedsLive: ‘120 tonne section of the A64 bridge replacement has just collapsed on the truck from the crane.’

The works were due to last the next four weekends, until 5.30am on Monday June 7.

The city centre site was set to reopen this Monday, but pictures from this morning show the area has been fenced off.

West Yorkshire Police have been contacted to provide comment.

Work on the Leeds Regent Street flyover project, that is estimated to cost £31million, began last May and is expected to last two years.

As part of the upgrade scheme, the 60-year-old bridge that supports the A64 Inner Ring Road over the A61 Regent Street will need to be demolished.

This is a developing story, with more details to come as we get them.