Overseas journalists covering the Tokyo Olympics will have their movements tracked by GPS and could have their passes revoked if they break the rules.

Organisers of the 2020 Games, which open in just over six weeks, are trying to reassure a sceptical public that the event can be held safely under strict virus rules.

There are about 6,000 reporters visiting Japan for the Olympics. They have been told to provide a detailed list of areas they will visit for their first two weeks in Japan, such as sports venues and hotels.

Tokyo 2020 chief Seiko Hashimoto said tracking technology would be used to make sure they only go where they are supposed to. 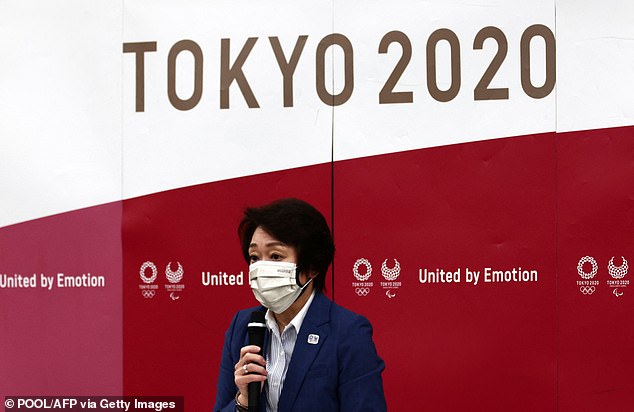 ‘To make sure that people don’t go to places other than the places where they are registered to go, we will use GPS to strictly manage their behaviour,’ Hashimoto said before a Tokyo 2020 executive board meeting.

Reporters will be urged to stay in designated hotels rather than private lodgings, she added.

The number of hotels will be reduced from an originally planned 350 to around 150, she said, as organisers try to keep visitors under close supervision.

Athletes will also face tight restrictions on their movements as well as being tested daily for the virus.

Overseas fans have already been banned from attending the event, and organisers will decide later this month how many domestic spectators – if any – can watch the competitions.

‘Today we are only 45 days away from the opening ceremony, although the state of emergency is in effect and the situation remains severe nationwide,’ Ms Hashimoto told the executive board meeting. 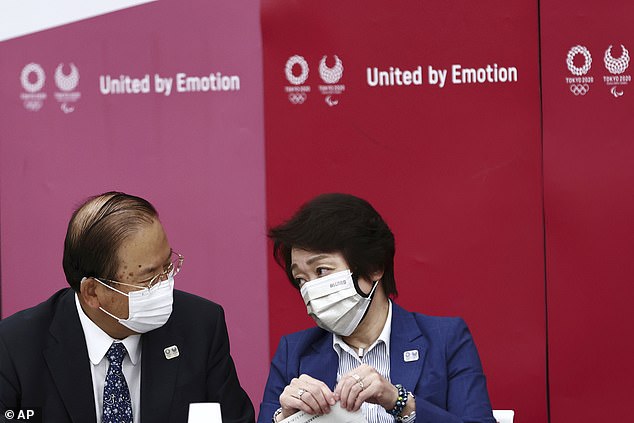 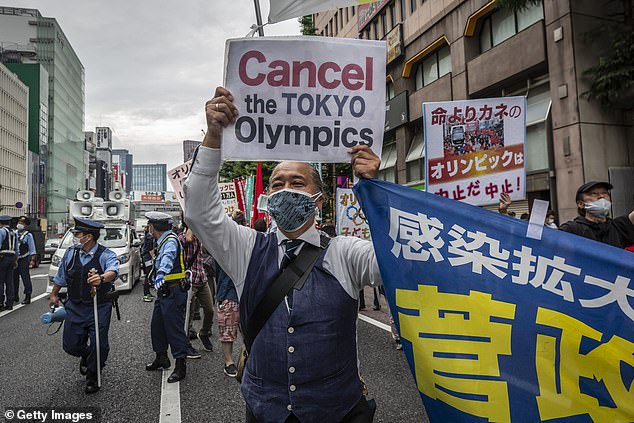 Organisers are facing increasingly strong opposition to the games. Pictured: A protester holds a placard during a demonstration against the forthcoming Olympic Games in Tokyo, Japan

‘The number of new COVID-19 cases in Tokyo has started to decrease little by little and we strongly hope the situation will be under control as soon as possible.’

The number of hospitalizations and the seriously ill have also decreased, but the levels are still higher than last fall when COVID-19 variants were not prevalent in Japan.

Experts last week on the Tokyo Metropolitan Government’s pandemic panel said that movement of people in central Tokyo had been rising for three weeks. They warned new infections could rebound if people continue to increase their mobility.

Japan has seen a smaller Covid-19 outbreak than many countries, but until recently its vaccine roll-out has been relatively slow, with around 3.5 percent of the population fully vaccinated so far.

Japan has attributed about 13,500 deaths to COVID-19, good by some standards but not as low as many countries in Asia.

National polls have tended to show that most respondents oppose holding the Olympics this summer, backing either a further postponement or cancellation.