Sore draw! Footballer, 7, scores fluke goal when the keeper smacks the ball straight into his face and it rebounds into the back of the net

This is the moment a young footballer scores the ‘luckiest goal ever’ when the ball strikes his face and loops over the goalkeeper into the net.

Seven-year-old Lewis Sedgley scored with the painful ‘header’ during a match in Hornchurch, East London, on October 25.

As he runs towards the goalkeeper he is met by the football, which smacks against his head and flies into the back of the net. 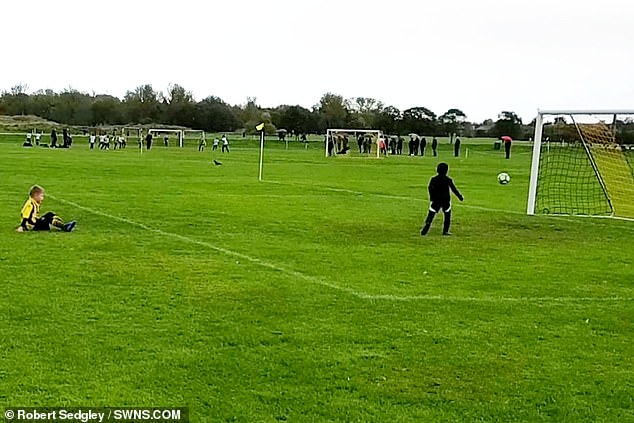 Seven-year-old Lewis Sedgley scored after it bounced off his face and flew into the net in Hornchurch, East London 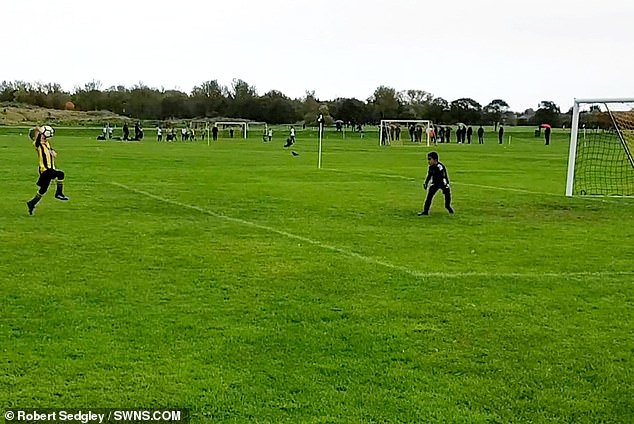 The boy in goals kicks the ball back to his players congregating at the other net, but hits it at Lewis’ head height.

Knocking the young sportsman over, the ball smacks off his face, but miraculously it flies over the goal keeper and into the back of the net.

Lewis’ father Robert Sedgley, 43, was watching his son from the sidelines playing for Tigers under 8s when the youngster found the net with a bizarre finish.

He caught the goal on camera and said the crowd roared with laughter when the ball crossed the line.

The unconventional header put the Tigers 5-4 up against Finesse before the game finished as a draw.

Robert said: ‘It was a wonderfully flukey goal. Lewis chased down the ball and the goalkeeper has gone to clear it.

‘He then caught it straight in the face and it turned into a great header. It just looped over the goalie and went in. 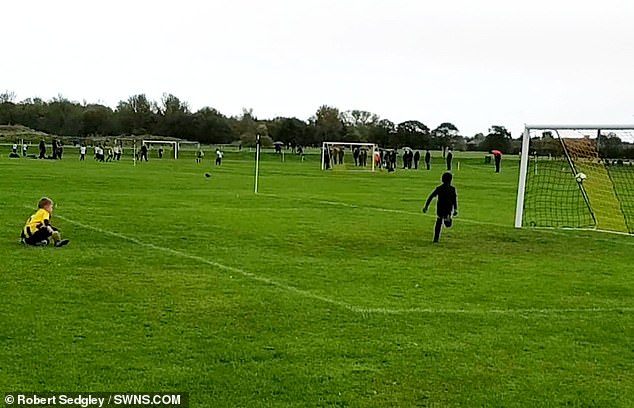 Lewis’ father Robert Sedgley, 43, was watching the Tigers under 8s playing and said if the ball hadn’t went in his son ‘probably would have cried as it did hurt’

‘If it hadn’t gone in he probably would have cried as it did hurt – but he was over the moon.

‘You can hear all the parents initially wince and go ‘ooh’ when it caught him in the face. Then there was a big cheer as it bounced over the keeper and went in.

‘Everyone has just been laughing about it. The fact I caught it all on video was even more comical.’