The sandstone cairn is 1.5 metres high and there will be a wreath made from twigs from a nearby banksia and a few sprigs of rosemary.

On Anzac Day maybe 30 people will gather for the dawn service at Little Garie Beach in the Royal National Park south of Sydney at what is believed to be the smallest memorial on the official NSW War Memorials Register. There won’t be a bugler this year (they are in short supply on the 25th) but there may be a spectacular sunrise out to sea and the Australian flag at what can be a breezy spot. 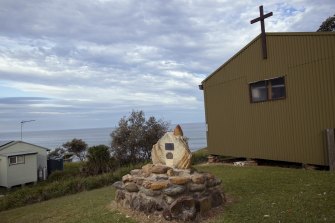 Someone played the bagpipes a few years back – the piper negotiated the near-kilometre long coastal path below the cliffs with a wailing skirl – even waves can’t drown out the pipes.

The do-it-yourself memorial was built by “shackies”, as the people of Little Garie are known. There were plenty of rocks to choose from.

Inside the adjacent community hall, which doubles as a chapel, is an honour roll with 28 names, more than you might expect from such a small community. One from World War I, 21 from World War II and six from the Vietnam War.

The lone woman named is Catherine Warnes, lead singer in a group called Sweethearts on Parade. She was performing on stage at a club for non-commissioned officers in South Vietnam when, from outside, she was shot in the chest and killed. A US marine allegedly attempting to shoot his commanding officer was convicted of murder but freed two years later after a retrial. 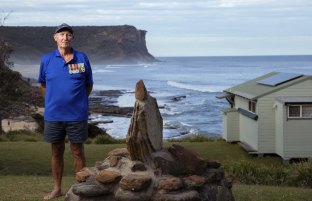 Tim Strange is one of the shack dwellers allowed to live a few weeks of the year at one of the 20 huts built by the owners’ forebears in the Royal National Park and enjoying, for the time being, heritage status.

Private Strange was a machine gunner with 1RAR infantry battalion in Vietnam. “Sorry, I can still quote the facts of the machine gun (an M60): 650 rounds a minute, weighed 26½ pounds and a 100-round belt weighs 7 pounds and I carry 320 rounds and the rest of the section carried 1000 rounds for me.”

He is talking with his wife, Denise, in their shack with a beach view from the bed, 20-year-old gas fridge and al fresco shower. Shells and the exoskeletons of marine life washed up on the beach dangle from the ceiling. 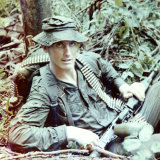 Strange when he was a machine gunner in Phuoc Toi, Vietnam.

He had a party in the community hall in 1968 with his platoon before leaving for Vietnam. Even earlier than that he attended Sunday school in the same building, although he would have preferred to be playing on the beach.

“We did all the things soldiers do in silly war places,” he said.“I spent more time out in the jungle than back at camp.

“I’ve come through it better than a lot, I still have my moments but not too bad. This place down here is probably one of the saviours if you like. We started off having Anzac Day and we had a bit of a pile of rock and then someone said why don’t we build a proper memorial? Because it was registered … we got a little plaque put on it only three weeks ago.”

On Anzac Day Mr Strange puts on a uniform and makes a bit of a show of things for the benefit of the kids. After the 5.30 service there’s breakfast followed by an essential activity. “We come back to the hall at about 10.30 and we play two-up on the floor with all the kids to teach them what it is.”

Denise, with a photograph in her hand, says she makes the wreath and “tells him what to do.

“We brought a photo from home. This fellow Terry Curtin died of cancer last year [often attributed to Agent Orange] so we are going to do a wreath for him. I’ll just put rosemary all around it and maybe a couple of red poppies.”

Catch all the day’s headlines

At the end of each day, we’ll send you the most important breaking news headlines, evening entertainment ideas and a long read to enjoy.  Sign up to The Sydney Morning Herald’s newsletter here, The Age’s here, Brisbane Times’ here, and WAtoday’s here.