President Emmanuel Macron of France vowed Friday that the country would “never give in” to Islamist terrorism after a police employee working near Paris was stabbed to death by a suspected extremist from Tunisia.

The 36-year-old suspect, who was later shot dead by responding security officers, had shouted “Allahu Akbar!” (God is Greatest) during the attack and had scouted out the site, prompting France’s anti-terror chief to launch an investigation, Reuters reported.

The victim was a 49-year-old mother of two who was stabbed twice in the throat while returning to work from her lunch break, France 24 reported. She died a short time afterward, the report said.

The attack took place in what was thought to be a secure entrance area of a police station in Rambouillet, about 40 miles outside Paris.

“In our fight against Islamist terrorism, we will never give in,” Macron wrote on Twitter in response to the murder, identifying the victim as “Stephanie.”

“The nation is by the side of her family, her colleagues and security forces,” he wrote.

The president was returning to France from a trip to the African nation of Chad at the time of the message, Reuters reported.

On Friday evening, about 30 law enforcement officers raided the killer’s home in Rambouillet and also searched the residence of a person who took him in as a guest when he first arrived in France, according to AFP.

The killer was initially in France illegally but later obtained a valid residency card that was set to expire later this year, Reuters disclosed, citing a report on France’s BFM TV. 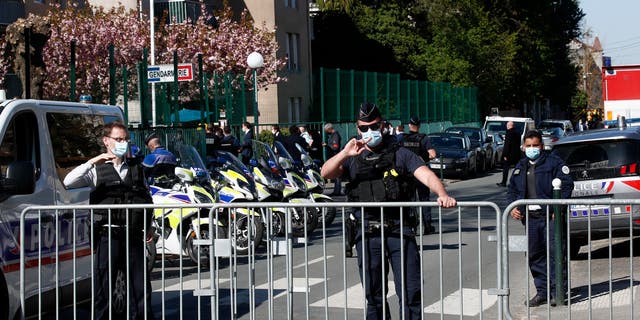 Police officers block the access with barriers next to the police station in Rambouillet, south west of Paris, Friday, April 23, 2021. (Associated Press)

He was previously unknown to authorities, the Reuters report said.

France has seen a number of attacks over the past year that authorities have said were linked to the spread of radical Islam. 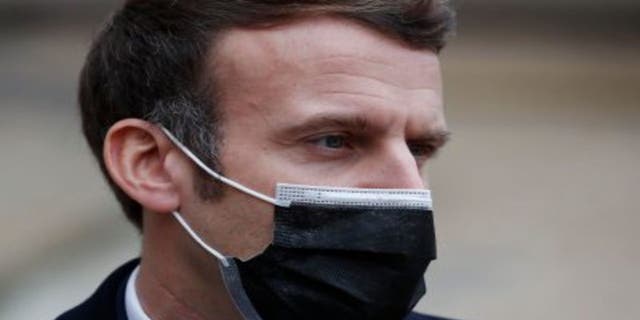 They included a suspect from Pakistan wounding two people with a meat cleaver in September, a Chechen refugee beheading a teacher Oct. 16, a Tunisian national stabbing three people Oct. 29, and a police employee tied to radical Islam who fatally stabbed three officers and another police employee in October 2019, France 24 reported.

Those attacks followed a series of horrific larger-scale attacks: the January 2015 massacre of employees at the satirical magazine Charlie Hebdo, and the November 2015 multi-site attacks at bars, restaurants and entertainment and sports venues that left 130 people dead and 350 wounded.

In 2016, a driver in Nice rammed a truck into a crowd, killing 86 people, just weeks after two police officers were stabbed to death near Paris by a suspect who claimed to be a supporter of ISIS.

Macron’s government has proposed legislation targeting Islamist extremism but the plan has received criticism from some Muslim countries, according to France 24.