A man charged with bashing a 78-year-old woman on the steps of a Melbourne church is also accused of assaulting another person the same day. 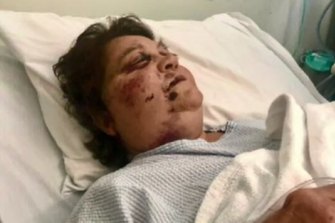 Penelope Katsavos in hospital after the attack, in a photo supplied by her family.Credit:Nine News

Police allege Mr Roy assaulted her, inflicting serious injuries and stole her shopping trolley about 6.15am.

A council worker found the grandmother on the church steps about half an hour later. She had suffered bleeding on the brain, a fractured pelvis and a broken wrist.

Mr Roy wore a face mask as he appeared before court on Friday, via a video link from custody, and appeared to have a bruise under his left eye.

His lawyer, Ellen Murphy, said Mr Roy also needed to see a nurse for a laceration to his head. 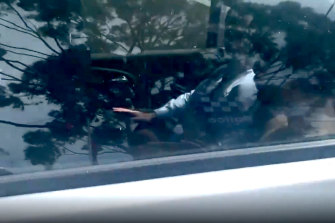 Amrick Roy in a police car after his arrest on Thursday.Credit:Nine News

Ms Katsavos was released from hospital and reunited with her elderly husband on Thursday, the same day police arrested and charged Mr Roy.

Ms Katsavos’ trolley, wallet and mobile phone were found close to where she was attacked.

The accused man has never been in custody before, Ms Murphy said. He did not apply for bail.

Magistrate Phillip Goldberg remanded him to next face court on June 16.

Catch all the day’s headlines

At the end of each day, we’ll send you the most important breaking news headlines, evening entertainment ideas and a long read to enjoy.  Sign up here.