Britain should use ‘wellbeing’ science to allow a ‘phased’ easing of the coronavirus lockdown that has paralysed the economy, a former top civil servant said today.

Gus O’Donnell urged ministers to use quality of life measures balanced against the death toll to allow the UK to follow Sweden’s example of a gradual lifting of restrictions.

His advice came as economists from the London School of Economics published a new academic paper suggesting expanding on quality-of-life measures used by the NHS to other aspects of life, as a guide to when to allow people to leave home.

Lord O’Donnell, who was Cabinet Secretary from 2005 to 2011, said ministers should use this to allow those least at risk to go back to work first.

It comes as ministers face growing discontent from Tory backbenchers and others who want clarity over how the lockdown will be lifted.

Writing in the Times he said: ‘We should phase the exit from lockdown and move to a situation like Sweden’s. 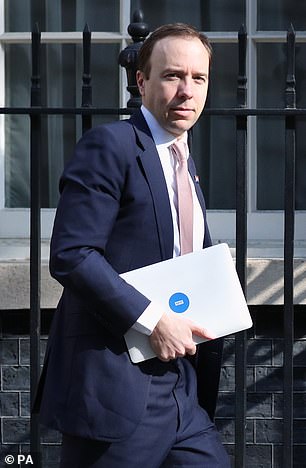 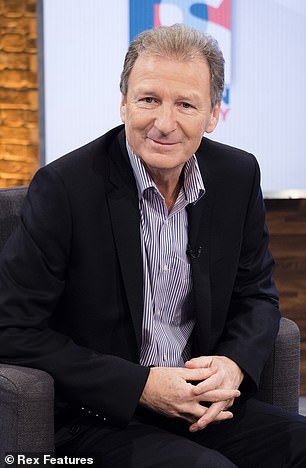 Gus O’Donnell (right)  urged ministers to use quality of life measures balanced against the death toll to allow the UK to follow Sweden’s example of a gradual lifting of restrictions. It comes as Health Secretary Matt Hancock (left, today) face growing discontent from Tory backbenchers and others who want clarity over how the lockdown will be lifted

‘The most vulnerable would have to continue to obey the current rules. Schools and businesses would open, but with safeguards.

‘The approach to construction, where sites can be reopened within government guidelines, would be extended to the whole economy.

This would still mean people working from home where possible and employers would be encouraged to stagger working hours.

‘The period before the lockdown is released should be used to develop more widespread testing and tracing capabilities.

‘Mass gatherings would still be off limits for a few more months.’

Calls for Downing Street to be frank with the nation about the end of the lockdown have increased after Nicola Sturgeon set out her own plan for Scotland yesterday while Wales is doing the same today and Northern Ireland has signalled it could follow suit.

Mr Hancock and other senior ministers have so far refused to budge on the issue, insisting the focus must remain on slowing the spread of the disease.

But furious Tory MPs have demanded the government ‘bite the bullet’ and set out its strategy to give businesses hope that measures could soon be lifted.

The Health Secretary was asked this morning during a bruising interview on BBC Radio 4’s Today programme why the UK government is refusing to spell out how it will ease restrictions.

But he claimed ministers had ‘released a framework’ as he referred to the government’s five tests which need to be met before lockdown can be reduced. Those tests include a guarantee there will not be second peak of the outbreak.

In their paper today, the team at LSE’s Centre for Economic Performance suggested using ‘wellbeing years’ as a determinant for when to lift the lockdown.

This is an expansion of quality of life years (QALYs) which have been used by the NHS for decades to help determine whether it is right to treat a patient or not, based on how it will impact their remaining years.

They say that policymakers should lift the lockdown when the ‘net benefits’ of doing so are positive.

Positive factors including bringing the economy back to life, reducing mental health problems, lowering domestic violence and addiction, maintaining confidence in the government and getting schools reopened, have to be weighed against possibly causing a new spike in deaths from coronavirus, increasing deaths relating to a return to work like road accidents, and a detrimental impact on the environment from pollution.

Their paper suggests that easing the lockdown any time from June 1 onwards would have a positive result using their system – but earlier would have a negative impact.