New Zealand records ANOTHER day without any new coronavirus cases

Prime Minister Jacinda Ardern has lauded New Zealanders for their commitment to lockdown after a second-straight day without a new case of COVID-19.

The number of ‘confirmed and probable’ infections remained at 1,487 after one suspected case ‘already known to us’ tested positive on Monday, the health ministry said.

The death toll was also unchanged at 20, while only four people are currently in hospital, none of them in intensive care.

On Tuesday, Ms Ardern spent time speaking with Australian leaders at the national cabinet, sharing information from their experiences fighting the spread of the virus.

She also discussed the resumption of regular trans-Tasman travel. 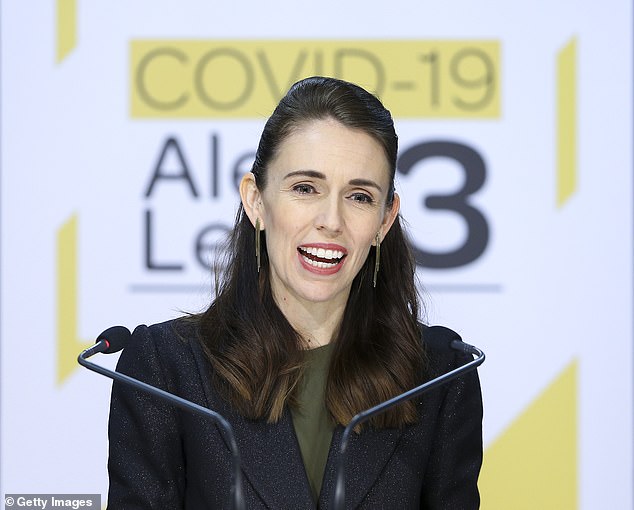 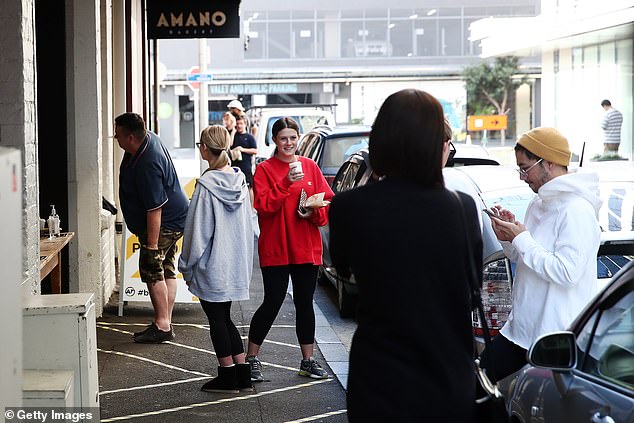 The number of ‘confirmed and probable’ infections remained at 1,487 after one suspected case ‘already known to us’ tested positive on Monday and the death toll was also unchanged at 20 (pictured: Shoppers in Auckland after lockdown restrictions were lifted)

While that prospect has many in both countries dreaming of a life beyond COVID-19 restrictions, Ms Ardern’s primary message to New Zealanders is one aimed at fighting complacency.

‘Achieving zero cases two days in a row is the result of New Zealanders demonstrating commitment and discipline to our goal,’ she said.

‘We know the virus can have a long tail and other cases can pop up … so don’t do anything that snatches our potential victory at this point.’

New Zealand’s director-general of health Ashley Bloomfield said the figures were a ’cause for celebration’ and ‘symbolic of the effort that everybody has put in’ but warned that Kiwis would need to keep up ‘continuing vigilance’.

Prime minister Jacinda Ardern said Kiwis’ efforts had ‘put us at the front of the pack’ but warned them ‘not get ahead of ourselves’, telling them to ‘stick to our bubble and finish the job we started’. 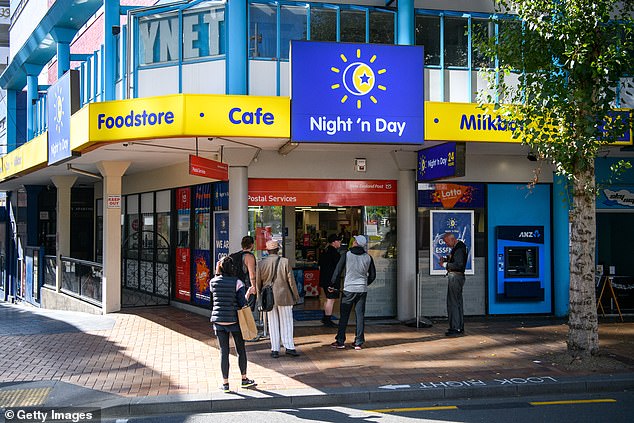 On Tuesday, Ms Ardern spent time speaking with Australian leaders at the national cabinet, sharing information from their experiences fighting the spread of the virus 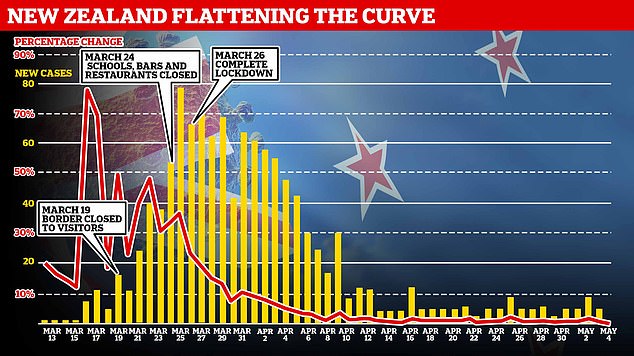 This graph shows how New Zealand has brought the epidemic under control, with new daily cases (in yellow) falling to zero and the daily percentage increase (in red) also very low

New Zealand only confirmed its first case on February 26, but had shut its borders by March 19 and started imposing a full-scale lockdown on March 26.

The lockdown was eased last week, allowing takeaways to resume from restaurants and hundreds of thousands of people to return to work.

Gatherings of up to 10 people are now allowed for events such as weddings or funerals under the so-called Level 3 restrictions, down from the highest Level 4.

Prime minister Jacinda Ardern is due to decide in the next week whether the country can move down to Level 2, in which gatherings of 500 could be allowed.

Public venues and ‘most businesses’ would be allowed to re-open under Level 2, subject to health restrictions.

Speaking Monday, health director Bloomfield said the ‘real test’ would come later this week when any new cases caused by the move to Level 3 start to become visible.

‘Clearly, these are encouraging figures today. But it is just one moment in time,’ he told a press conference.

‘The real test is later this week when we factor in the incubation period for the virus and the time it takes for people to display symptoms, which is generally five to six days after exposure.

‘So that is when we will have an indication if there are any new cases coming through that might be emerging in the community as a result of our shift from level four to level three.

‘We cannot afford to squander all the hard work and effort of the past weeks.’ 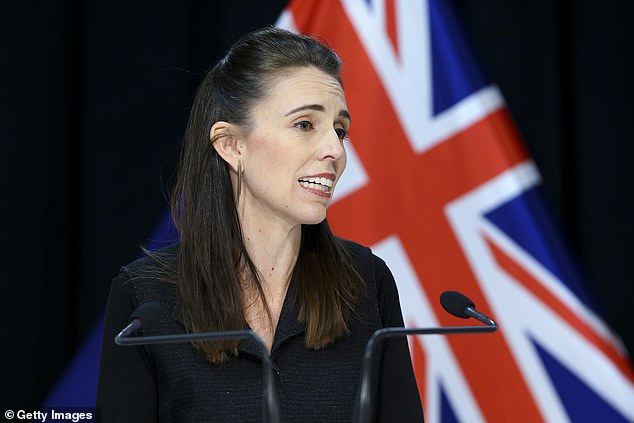 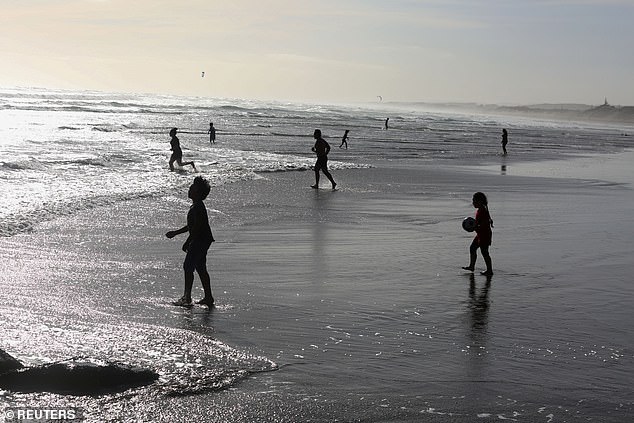 New Zealand is also considering a travel ‘bubble’ with Australia that would allow people to travel between the two countries.

Parts of Australia also began relaxing lockdown rules over the weekend, with some regions allowing more outdoor activities and small gatherings. The country has seen 6,801 cases and 95 deaths.

Ardern will join her counterpart Scott Morrison and Australian state leaders in a virtual meeting tomorrow to discuss the ‘trans-Tasman bubble’ proposal.

‘Both our countries’ strong record on fighting the virus has placed us in the enviable position of being able to plan the next stage in our economic rebuild,’ Ardern said.

Morrison had said last week that the ‘only exception’ to the travel ban was ‘potentially with New Zealand, and we have had some good discussions about that’.

Ardern said the two-week quarantine periods which both countries currently impose on international arrivals would be mutually waived under the proposal.

She was reluctant to speculate on when it could take effect but warned: ‘Don’t expect this to happen in a couple of weeks time.’

‘We need to ensure that we’re locking in the gains that all New Zealanders have helped us achieve and make sure we have health precautions in place to make sure we do this safely,’ she said.

Ardern was cautious about the prospect of allowing Pacific island nations which are free of Covid-19 into the bubble due to the inability of their health systems to deal with even a minor outbreak of the virus.

‘That’s a conversation we’d need to have directly with them,’ she said. ‘There’s a huge risk if COVID finds its way into Pacific island nations that are currently untouched.’ 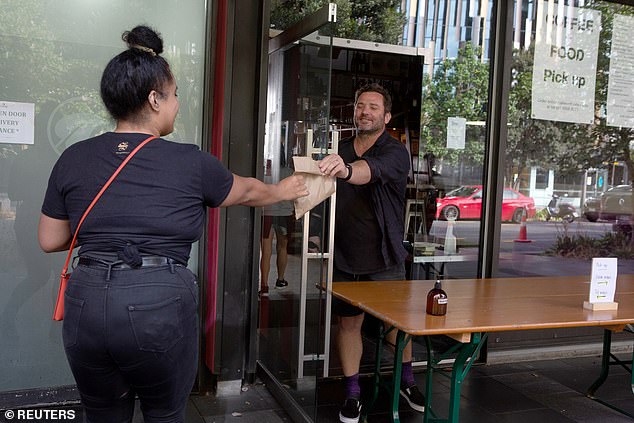 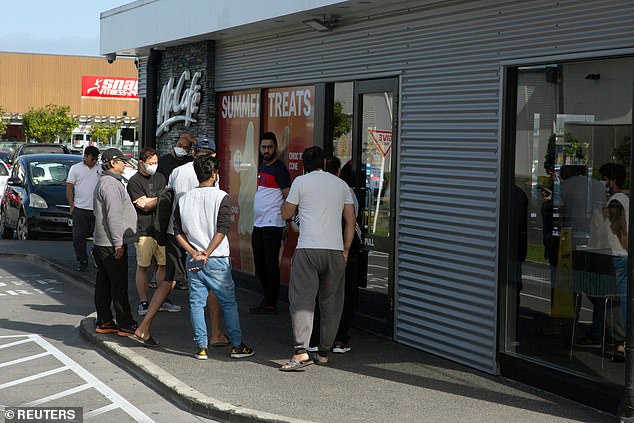 New Zealand has carried out nearly 153,000 tests for a population of five million and has another 59,000 testing kits in stock.

So far, there have been 1,137 confirmed cases and another 350 ‘probable’ cases, some of which are likely to be added to the ‘confirmed’ column.

Only 191 cases are considered ‘active’, with just four people currently in hospital – down from eight yesterday.

New Zealand says that 38 per cent of its cases are imported and another 32 per cent are linked to imported cases, leaving only a minority of cases transmitted locally.

Ardern has previously hailed New Zealanders for ‘breaking the chain of transmission’ during the successful five-week lockdown.

New Zealand has also provided exhaustive detail about the epidemic on a government website, including details of every case.

Bloomfield said that New Zealand has ’16 significant clusters’ although three are ‘considered closed’ after 28 days without a new case.

‘We are still wanting to be sure that there is no undetected community transmission in our communities,’ Bloomfield said.

‘So reflecting on the incubation period of this virus, and it is really later this week that we will be confident if we are or are not seeing new cases popping up in the community, so that is why it is very important we maintain the current posture.’