NHS hospitals could restart routine operations as soon as next week as the health service prepares plans to get back on its feet as the coronavirus crisis blows over.

Private hospitals have laid empty in the past week and up to 40,000 NHS beds are thought to be empty.

Routine operations had been cancelled and patients sent home to open up capacity for an expected surge in COVID-19 patients after stories emerged of hospitals being overwhelmed by the pandemic in China and Italy.

But the NHS has coped with the strain and hospitals are now keen to get back to business as statistics have shown patients in need are avoiding emergency departments and even going against paramedics’ advice to go into hospital.

One healthcare boss has stressed that ‘the NHS is open’ and said he didn’t think it was clear enough that people could still use health services as normal.

Others have said they want to get operating theatres up and running again as many of their beds lie empty, suggesting surgery could restart as soon as next week.

Health officials and charities have raised concerns that cancer patients are missing treatments and diagnoses, and that the impact the coronavirus is having on slowing down medical services is putting lives at risk among people who don’t even catch the virus.

It comes after critics complained that a social media video of nurses dancing suggested that they had time to be doing more to help ‘forgotten’ patients. 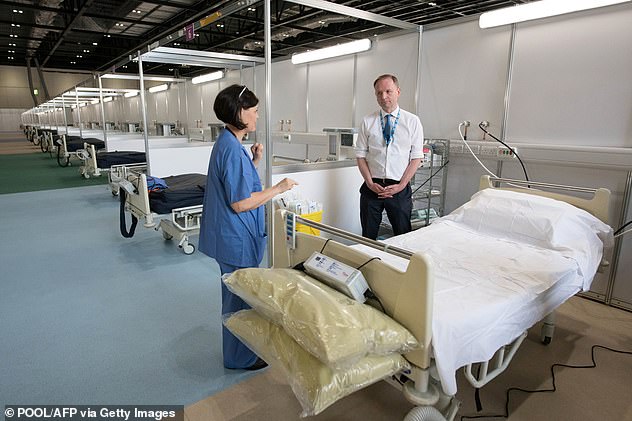 The emergency overflow Nightingale hospitals, set up around the country, have gone largely unused as a tsunami of dying patients that was expected never seemed to materialise 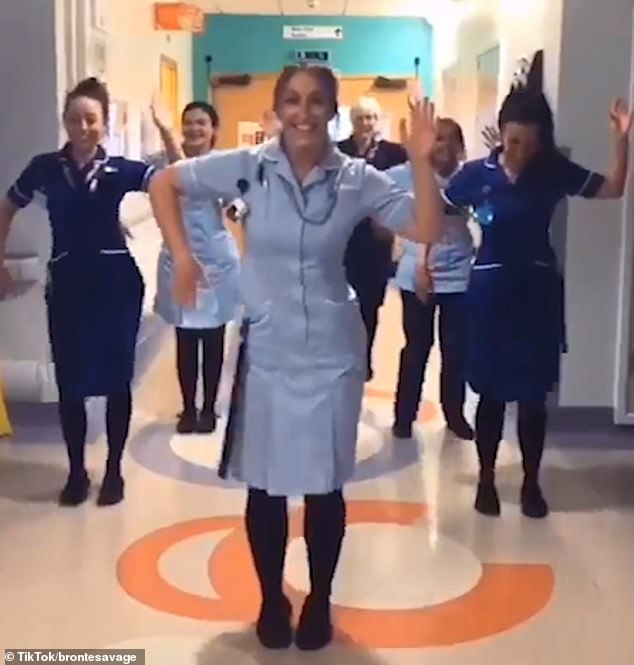 NHS England will publish a plan next week to help its hospitals ‘release and redeploy treatment capacity’ that had been set aside to cope with coronavirus patients, the Health Service Journal reported.

This includes beds which had been kept free, operating theatres converted to wards, staff reassigned to the frontline and routine appointments and non-urgent treatments put on hold.

But the devastating tsunami of dying patients appears not to have come, with the overflow Nightingale hospitals relatively unused and NHS and government bosses insisting there have been intensive care beds available to all who need them.

Beth Purvis, a 40-year-old mother of two, has stage-four bowel cancer that has spread to her lungs.

But an operation to remove a tumour from her right lung – scheduled for March 25 at the Royal Brompton Hospital in Chelsea, London – was cancelled with only a week’s notice amid the coronavirus crisis.

Mrs Purvis said: ‘I was devastated, I just burst into tears. It is a critical operation because it can help buy me time and there is a small chance it might be cured. 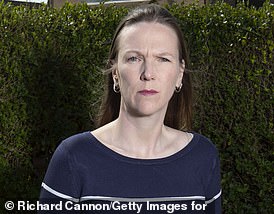 Pictured: Beth Purvis, whose operation to remove a tumour in her right lung was cancelled with a week’s notice

‘If you leave the cancer, it has the opportunity to grow and spread further, I just do not know what it is going to do or how long it is safe to leave it for.’ The operation had offered her and her family some much-needed relief, said Mrs Purvis, from Bishops Stortford, Essex.

‘When you have stage four cancer, every time something pops up you just hope that you can treat it. Each treatment just gives you hope and all that hope had been wiped away.’

Mrs Purvis has now been offered stereotactic body radiotherapy which she was not eligible for before due to the number of tumours in her lungs.

Her doctors feel it is a safer option than surgery because of the risk of catching coronavirus in hospital. She said: ‘It may actually turn out to be a better option in the long run.’

Mrs Purvis said she understood why the decision to cancel her surgery was made, adding: ‘It is a really difficult situation because those of us waiting for operations will probably last a few weeks or months without our operations. Logically and rationally, I understand the decision but emotionally I am completely drained.’

Mrs Purvis said she and husband Richard, a painter and decorator, were up front with their children, Joseph 11, and Abigail, ten. She added: ‘Their worlds have been turned upside down.’

Now that the numbers of patients on wards and in intensive care units are dropping across Britain and the peak of the epidemic has blown over, hospitals must attempt to return to business as usual.

NHS England told the HSJ: ‘Next week we will set out guidance to the service on releasing and redeploying some of the treatment capacity that needed to be created while the number of COVID-19 patients was rising so sharply.

‘A public information campaign beginning this weekend will remind people that the NHS remains open for business, and it is important that non-COVID-19 patients can also still safely access the appropriate care and treatment they need.’

Hospital bosses have told the NHS news website that they are keen to get operating theatres up and running again. Many had been closed to make way for overflow wards.

Only urgent surgery is currently taking place but health chiefs say routine ops could restart as soon as next week.

One chief executive at more than one NHS hospital told the HSJ: ‘The empty beds in my hospitals have been paid for also, as have the staff…

‘The sooner we can show that we are managing the safety issues the better. Otherwise we risk taking years off lives through debilitating conditions which could have been treated.’

There have been concerns for weeks that people who need medical help have been avoiding it out of fear of catching the coronavirus in hospital.

A&E attendances in March plummeted to the lowest levels in a decade and medics say people have even been refusing to let ambulances take them to hospital.

Toby Lewis, the chief executive of Sandwell and West Birmingham NHS Trust, which has been one of the worst hit parts of the NHS by the crisis, said more than 300 people had turned ambulance crews away in April.

He said: ‘I think the first message that the NHS needs to make clearer than we have so far is that the NHS is open.

‘And we are open for people who do not think they have COVID-19, but they may be concerned about a stroke, a heart attack… about sickle cell pain.

‘Over 300 patients in the last little while, who were asked by an ambulance crew to go to hospital, declined to be transported.

‘We are following up each of those individuals to make sure they are being looked after.

‘But it’s really important that in the messaging about social distancing and staying at home, we do not create a sense that it is more risky to go to hospital than it is nurture your condition and become progressively more unwell.’

The majority of Britons are not opposed to NHS staff making viral videos during their breaks, a poll today revealed.

YouGov carried out the survey of 2,710 Brits. Forty-five per cent of respondents said they are in ‘support’ of the clips.

Around 9 per cent held the opposite view, admitting they opposed the videos, which have been described as ‘tone deaf’ and ‘disrespectful’.

The other 45 per cent of people polled said they held no opinion.

In terms of a gender breakdown, a higher percentage of men were against the clips – 11 per cent compared to 7 per cent of women.

And the over-65s were the age group least in favour of the videos, according to the results of the survey.

Statistics from the NHS show that 40.9 per cent of NHS general acute beds were unoccupied at the end of the first week in April – the most recent figures available – a total of 37,500.

Experts have raised fears over the impact the delays and cancellations in treatments is having on the health of patients with non-coronavirus symptoms, like those suffering with heart attacks, strokes or tumours.

Many are choosing not to visit their GP – and visits to A&Es are down by around a third.

Medics say up to 2,700 cancers are being missed every week as the numbers being referred by doctors for urgent hospital appointments or checks had dropped by 75 per cent.

Professor Karol Sikora, a cancer specialist, has warned that the impact of the coronavirus outbreak could result in 50,000 cancer deaths.

Meanwhile NHS staff have been accused of being ‘tone deaf’ after posting videos of themselves dancing at work on social media.

Medical workers were pressured to apologise after critics said it was ‘disrespectful’ to post light-hearted clips on social media while coronavirus patients were dying and others were missing out on vital treatment.

In a bid to continue crucial healthcare services for vulnerable people who would otherwise be ‘shielded’ at home, the NHS has said it will set up virus-free ‘hubs’.

Dedicated NHS and private hospital sites will be sectioned off and used entirely for seriously ill patients to get treatment without the risk of contracting coronavirus.

Sir Simon Stevens, chief executive of NHS England, will warn people that delays in seeking help can threaten their health and posters will attempt to reassure people that the NHS has space and dedicated ‘green’ coronavirus-free sites, The Times reports.

According to the newspaper, England’s 21 cancer alliances have each been asked to designate hospitals where patients who need urgent treatment can receive it.

Some are already up and running, including the Queen Victoria Hospital in East Grinstead which is treating patients who have head, neck, breast or skin cancer.

Everyone arriving on site has their temperature taken and must wear a facemask, and patients who need surgery are told to quarantine for seven days.

The plans are based on a model adopted in the capital, with the Royal Marsden Hospital becoming a central hub for cancer care across London.