Nicola Sturgeon’s depute will use the Covid pandemic as a justification for Scottish independence today – despite strengthening opposition to separatism.

Keith Brown will kick of the SNP annual conference this afternoon by claiming a message of ‘optimism and ambition’ for the future can lead the country to independence.

After the challenges of the pandemic, Mr Brown will stress that Scotland’s future post-Covid must not be ‘limited by the relentless negativity’ of a Westminster system which is ‘broken beyond repair’.

He will accuse the London-based parties of having a ‘can’t-do attitude’ and a ‘complete lack of vision’ – contrasting this with the SNP’s belief that Scotland ‘has what it takes to be a successful independent nation’.

His opening address comes after a new poll showed Scots growing desire to stay part of the United Kingdom.

Research by YouGov suggested another SNP bid to split the union would be rejected by voters, despite Ms Sturgeon renewing her vow to hold a referendum.

Excluding ‘don’t knows’, just 47 per cent were in favour of breaking away – unchanged since May but the exact reverse of the summer last year when the Covid crisis was raging. 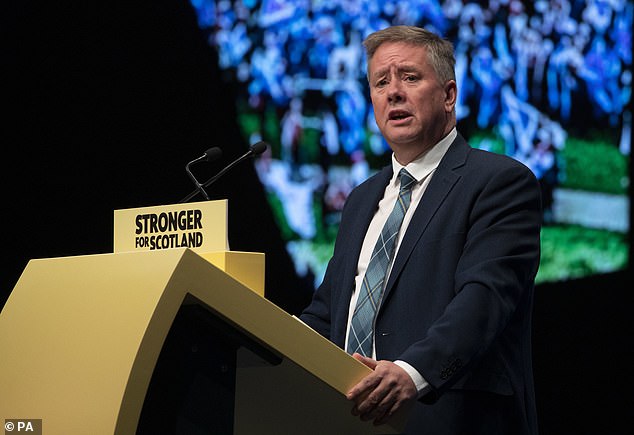 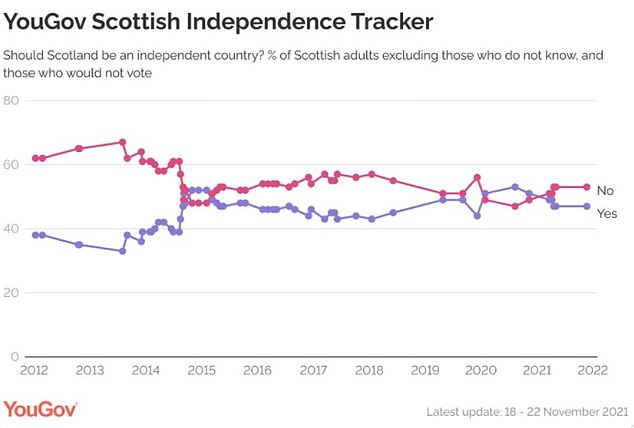 Research by YouGov suggested another SNP bid to split the union would be rejected by voters, despite Ms Sturgeon renewing her vow to hold a referendum.

Mr Brown will tell the conference’s online audience that the party is in ‘great shape’ and has ‘great resolve’.

Speaking at the start of the virtual gathering, he will say: ‘The last couple of years have been challenging for all of us, and they have made us all think about what really matters in our lives.

‘As a responsible government, the SNP’s first priority has been – and remains – steering Scotland safely through the pandemic.

‘While the whole Westminster system is quite clearly broken beyond repair, we are focused on delivering for the people in every corner of Scotland.’

He will add: ‘As we look to the future, we will urge the people of Scotland to think about what kind of country they want to live in when the pandemic is over.

‘Who is best placed to make decisions affecting their lives? Who is most committed to making Scotland a fairer, more prosperous nation and tackling key issues like the climate emergency?

‘We will not allow Scotland’s future to be limited by the relentless negativity, the can’t-do attitude and the complete lack of vision from the unionist parties.

‘Our case for Scotland’s future is one based on optimism and ambition. A belief that our nation has what it takes to be a successful independent nation.

‘And a belief that the people who live here can take better decisions about their lives rather than leaving Westminster in control.

However Pamela Nash, chief executive of the pro-UK campaign group Scotland in Union, said: ‘With a new opinion poll revealing that 59 per cent of people in Scotland want to remain part of the UK, Keith Brown is hopelessly out of touch.

‘He has nothing to offer but tired old rhetoric and the arguments of yesterday, while the country has moved on and is looking to the future.

‘Rather than obsess about how to divide Scotland’s communities, we have a positive future ahead of us in the UK where nobody is left behind and we build a recovery for everyone.’