‘Beware of the moon’: Royal Flying Corps training posters that were used to teach novice pilots during the First World War in the early days of aircraft combat emerge for auction

A fascinating set of Royal Flying Corps training posters that were used to teach novice pilots in the early days of aircraft combat have been unveiled after 102 years.

The set of nine black and white posters featuring illustrations and diagrams were issued by the Air Ministry in the final months of the First World War.

They would have been hung in training rooms at airfields to educate novice pilots ahead of their dogfights with German foes. 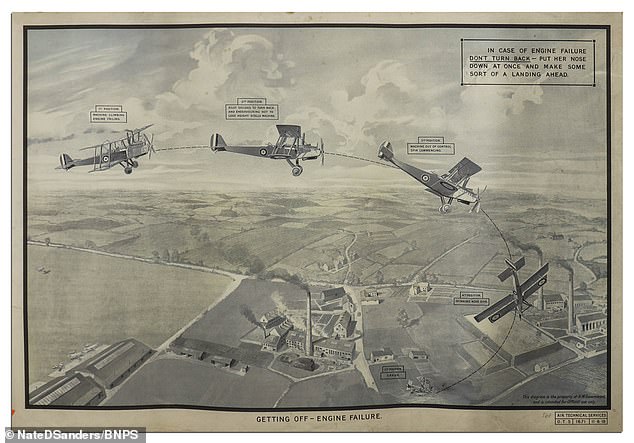 One Royal Flying Corps training poster details what to do in the event of an engine failure, advising: ‘Don’t turn back – put her nose down at once and make some sort of a landing ahead’ 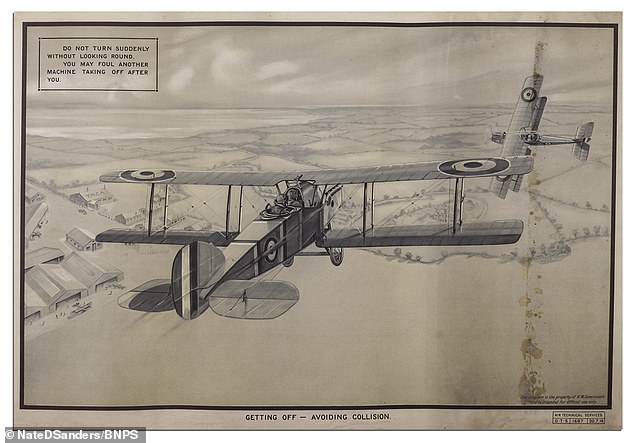 Another poster details how to avoid a collision, reading: ‘Do not turn suddenly without looking round. You may foul another machine taking off after you’ 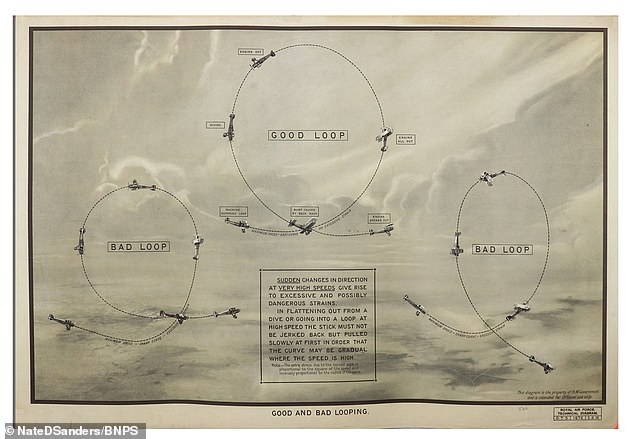 The above explains how to complete a perfect loop-the-loop, showing good and bad versions, warning against ‘sudden changes in direction at very high speeds’

It was the advent of the age of aviation with the pioneering Wright Brothers having only completed their first flight 15 years earlier.

One poster, titled ‘night flying’, explains how to approach enemy territory in darkness and to avoid being shot down.

Another, ‘beware of the moon’, warns against flying in front of white clouds, with German guns providing a stark warning of the perils of being detected.

A separate poster in the set tells pilots not to use flares while landing in fog at night as it obscures the ground.

Others explain how to land in a wind, and the dangers of turning too fast when taxiing – with an aircraft shown on its side in a field.

There are posters demonstrating how to land safely in instances of engine failure, and also best practice for formation flying. 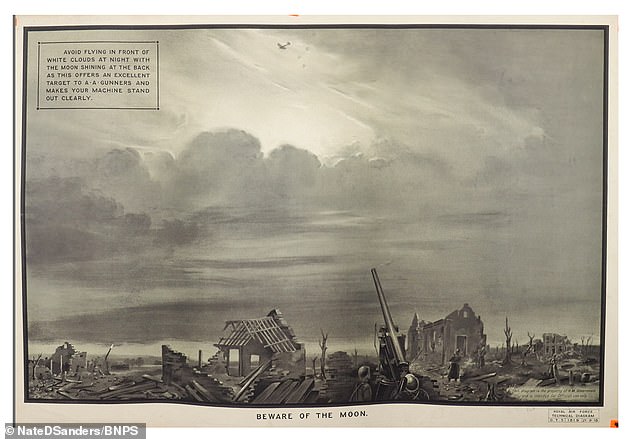 ‘Beware of the Moon’ warns against flying in front of white clouds, with German guns providing a stark warning of the perils being detected in the black and white poster 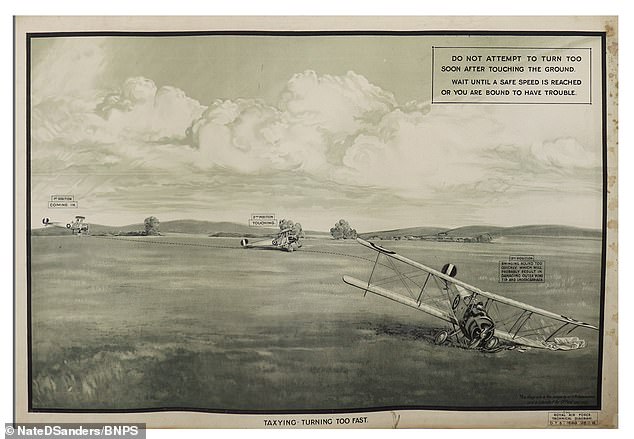 The dangers of turning too fast when taxiing, reading: ‘Do not attempt to turn too soon after touching the ground. Wait until a safe speed is reached or you are bound to have trouble’ 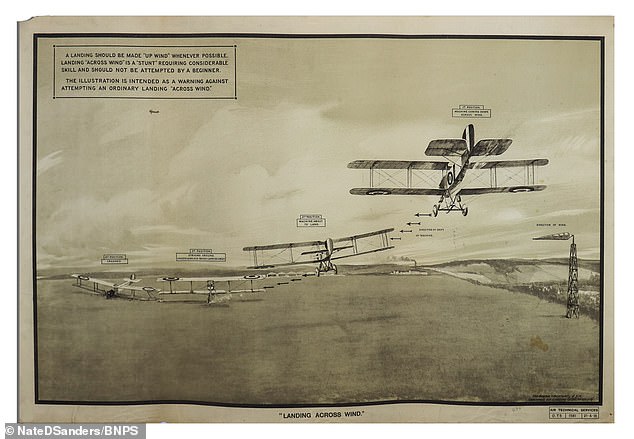 This poster explains how to land across wind, advising to make it ‘up wind whenever possible’, saying landing ‘across wind’ requires ‘considerable skill’

The posters, which measure 40ins by 27ins, are being sold at auction by a private collector with LA-based Nate D Sanders.

Nate Sanders, auction house owner, said: ‘These training posters were produced during the dawn of aviation.

‘It was the first time that planes were used during combat. 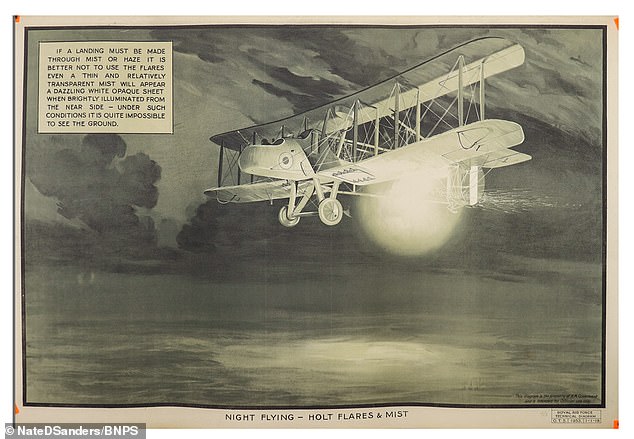 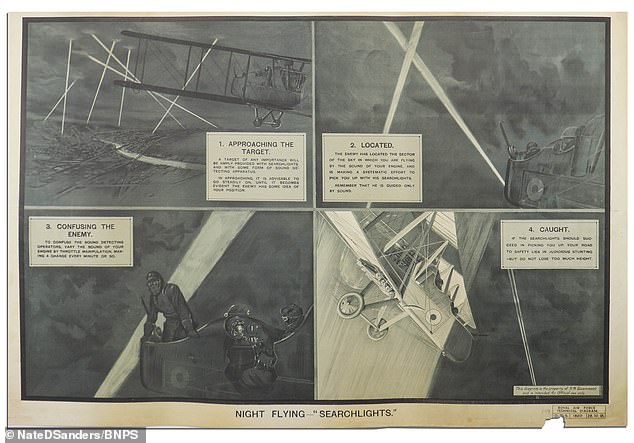 A night flying and avoiding searchlights poster, showing how to approach, locate, confuse and catch the enemy in the darkness while avoiding being shot down 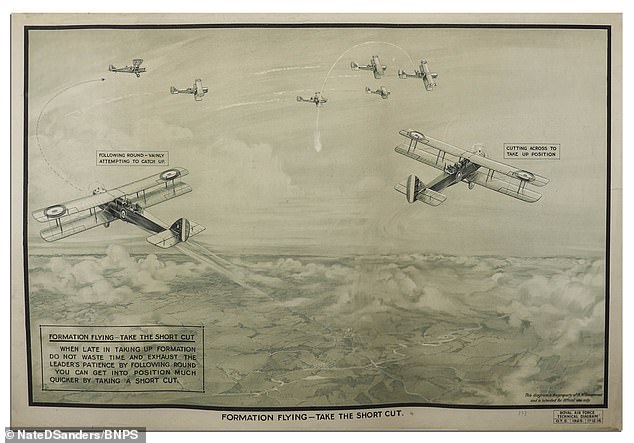 This poster explains how to catch up if you fall behind in a formation, stating: ‘Do not waste time and exhaust the leader’s patience by following round’

At the outset of the war the Royal Flying Corps was made up of just five squadrons.

Within 10 months, the air service increased five times in size and there was 10 times the amount of pilots, but – because of the high number of casualties – still more airmen were needed.

British airmen always attacked even against superior numbers but their gallantry came at a very heavy cost – more than 9,000 British airmen were killed during the war.

The RFC was amalgamated with the Royal Naval Air Service to create the RAF in April 1918.

The timed auction ends on Thursday.