Australia’s rail track corporation has pulled back from contentious plans to dramatically raise the height of three road bridges located in some historic towns in the north-east of Victoria, including the site of Ned Kelly’s last stand.

The proposed road overpasses were to be part of the 1700 kilometre Inland Rail project running from Brisbane to Melbourne. 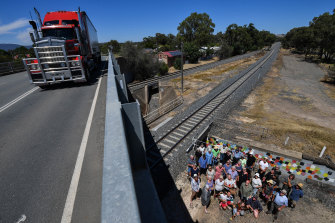 The freight rail project has already blown out in cost from its original $4.4 billion estimate to more than $14.5 billion.

But the backdown on the overpass plan may exacerbate the project’s financial woes with one infrastructure expert warning there may be more cost blowouts to come.

The Australian Rail Track Corporation (ARTC) is leading the Inland Rail project and had planned to build the new road overpasses at Euroa, Benalla and Glenrowan to allow for trains with double-stacked containers to pass underneath.

The proposed elevated bridges sparked fierce community backlash amid fears they would do major damage to the character and heritage of the towns.

However, the rail corporation reportedly told a Senate committee hearing late last week that it was reassessing the bid to construct the higher bridges, in a welcome development for worried residents.

A report by heritage consultant Deborah Kemp, who specialises in the state’s north-east, said the proposal to raise the overpass height at Glenrowan would reduce access to the site of Ned Kelly’s siege in 1880. 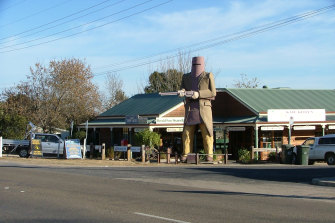 The statue of Ned Kelly at Glenrowan.

She found that while there was a lack of detail about the exact shape of the proposed new bridge at Glenrowan, plans to increase its size would spoil the site.

“The extent and scale of these works, their disruptive nature and removal of access is an unprecedented impact on any nationally significant site,” Ms Kemp wrote. “This proposal pays little respect to any of the cultural values.”

At Euroa, the plan would have raised the level of the overpass above nine metres, including a safety barrier.

When asked why it was scrapping plans for the bridges, the rail corporation’s Victoria projects general manager Ed Walker said safety was the most important priority.

“ARTC is investigating all safe and effective options for the passage of freight services through these communities,” he said.

Mr Walker said the corporation would consult with a newly formed stakeholder group and a community working group but insisted this process would not affect the overall delivery of the project.

Some Euroa residents had been lobbying for the Inland Rail project to scrap the current road bridge, which they say is ugly and divides the town. 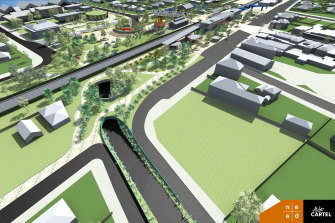 An artist’s impression of the proposed road underpass at Euroa.

The latest statements in the Senate committee have raised hopes in the town that the corporation may agree to a road the rail track despite ruling out that option earlier this year.

Euroa residents delivered their own plan to the Senate committee hearing last week, which includes the underpass and redevelopment of the station.

North East Rail Alliance convenor Alana Johnson said the three towns had faced the prospect of much bigger bridges than the existing structures.

But Ms Johnson said the corporation had now accepted the “local solution” for Benalla, which involves relocating 1.3 kilometres of track to the other side of the railway station, doing away with the need for an overpass.

“I think it’s certainly possible,” she said. “There’s no reason to imagine we’ve had our last cost overrun on this project.”

“Locals rightly pointed out that this would create eyesores and further divide historic towns such as Euroa, Glenrowan and Benalla,” they said. “While Labor is glad that the ARTC has finally listened to local communities, we remain seriously concerned regarding the future of this project.”