‘The mob needs to be stopped’: Home Secretary Suella Braverman vows to give police the powers they need to tackle and jail eco-protesters who have struck across Britain – and slams forces’ ‘wokery’ with demand for ‘common sense’ crime-fighting reset

Suella Braverman vowed to tackle ‘the mob’ of climate protesters striking across Britain today as she gave a tub-thumping speech vowing to get tough on crime and wokery.

The Home Secretary lashed out at demonstrators but also reserved criticism for police forces for taking a soft line with political protests.

In a speech to the Conservative Party Conference in Birmingham today which was given a standing ovation she said she would ‘always back our police’ but it was wrong for forces ‘take the knee and join in with political demonstrations’.

She went on to say that officers should stick to ”common sense policing… not policing pronouns on Twitter’.

‘It’s time for the police to stop virtue-signalling and start catching robbers and burglars,’ she added.

‘We need common sense policing. Unashamedly and unapologetically on the side of the law abiding majority.

‘That means that the mob needs to be stopped. The police must have all the powers that they need to stop protestors who use guerrilla tactics and bring chaos and misery to the law-abiding majority.

‘It’s not a human right to vandalise property. It’s not my ”freedom of expression” to protest violently. No – you can’t just start a riot or glue yourself to the roads and get away with it.’ 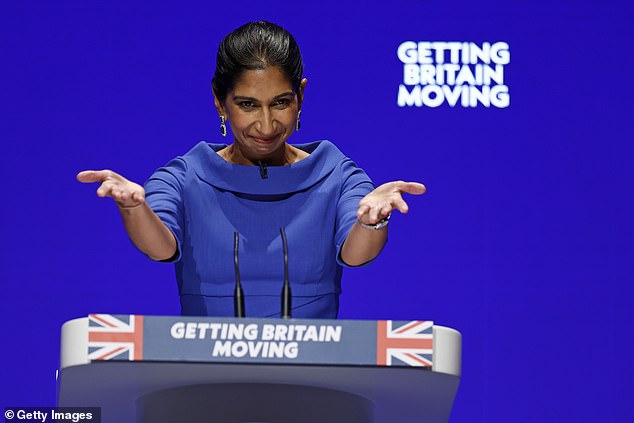 The Home Secretary lashed out at demonstrators but also reserved criticism for police forces for taking a soft line with political protests. 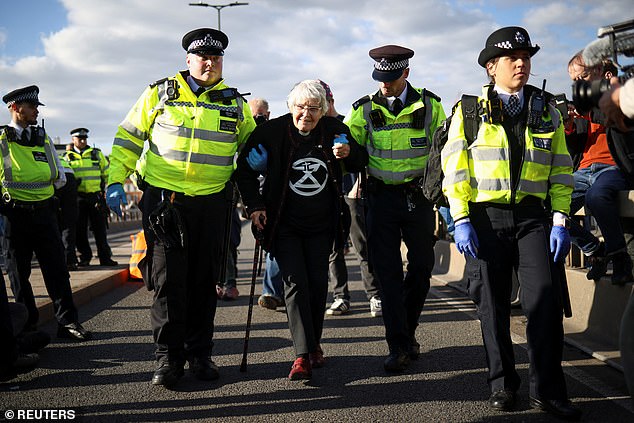 Members of the group Just Stop Oil occupied four bridges in the capital at the weekend, causing gridlock on busy roads, before converging on Parliament 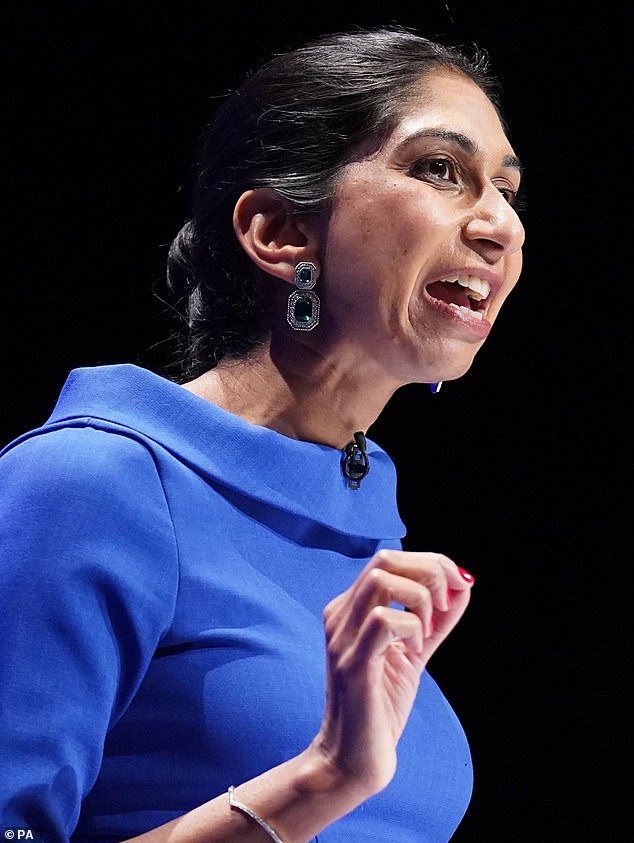 In a speech to the Conservative Party Conference in Birmingham today which was given a standing ovation she said she would ‘always back our police’ but it was wrong for forces ‘take the knee and join in with political demonstrations’.

It came as an eco-zealot seen in video pouring human excrement over a memorial to pandemic hero Captain Sir Tom Moore has pleaded guilty to causing criminal damage in the ‘abhorrent act’.

Maddie Budd, 21, was arrested in London on Sunday over the attack at the memorial in Hatton, Derbyshire.

Footage of the stunt, carried out for the pressure group End UK Private Jets, shoed her drenching the monument – which honours the 100-year-old World War Two vet who raised £33million for the NHS during lockdown – in urine and faeces.

She has been remanded in custody ahead of a sentencing hearing later this month.

And at the weekend, eco-zealots including pensioners occupied London bridges and lay down in the middle of the road as they brought the capital to a standstill.

Police  arrested 31 protesters after they paralysed the City on the second day of a planned month-long campaign of mayhem.

Members of the group Just Stop Oil occupied four bridges in the capital, causing gridlock on busy roads, before converging on Parliament.

The protests were the start of an ‘October uprising’ revealed last week in an undercover investigation by The Mail on Sunday.

‘Many on the left want to defund the police, Ms Braverman added. ‘Well I say to the militants, I say to the anarchists and the extremists: I will always back our policemen and women. That’s what being on the side of the law-abiding majority means.

‘But we also need to be frank when things go wrong. Some police officers have fallen devastatingly short of the standards expected.

‘We need to get back to common sense policing, empowering the Police to tackle the real issues facing the public – not policing pronouns on twitter or non-crime hate incidents.’

‘The Home Secretary has plenty of rhetoric but the reality is that under the Tories there are 6,000 fewer neighbourhood police and the rate of criminals being charged is now at a record low,’ she said.

‘After 12 years, the Tories are out of ideas and just fighting with each other. Britain deserves better than this damaging chaos.’