With travel to Bali off the cards for the foreseeable future, Australia’s very own Indian Ocean tropical island paradises are seeing a huge boost in visitors from the mainland.

Life was looking bleak for tourism businesses on Christmas and the Cocos (Keeling) Islands last month. 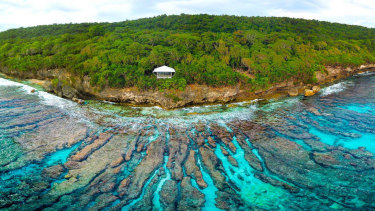 Christmas Island was at the centre of Australia’s initial response to the coronavirus pandemic after the detention centre became a quarantine camp, housing Australians returning from the virus’ city of origin, Wuhan.

Despite never recording a single case of the virus the island copped damaging PR and, coupled with travel restrictions, many of the businesses there shut up shop, not knowing when, or if, they would open again.

But after convincing state and federal governments to create a travel bubble between WA and the Indian Ocean Territories in July, businesses are reporting a surge in visitors keen on squeezing in their tropical getaway within the bounds of tough border restrictions.

Christmas Island Tourism Association marketing manager Jahna Luke is currently on a travel agent roadshow in mainland WA because of the huge amount of interest in the islands.

“It was about four months we were closed and it would have been devastating if we kept going that way,” she said.

In a normal year, 66 per cent of the island's visitors come from Australia and about half of those are from WA. The rest are international visitors who fly in from Jakarta.

Arrivals into Christmas Island for 2019 hit 2190 but by the beginning of August, that number was only just above 320.

Ms Luke said with the bubble in place she was confident that number would increase and the island’s peak season could be saved.

“After the bubble was announced it took two or three weeks for people to get their bookings in place but we are really noticing the numbers coming through,” she said.

Chris Bray owns Swell Lodge on the western side of Christmas Island and was instrumental in highlighting the need for a travel bubble.

He had to shut down the lodge completely and let staff go, but is hopeful the bubble will see things return to normal.

“With this new travel bubble that’s just opened up … we’re now seeing West Aussies excited to book in here for that warm, sunny, tropical holiday they’ve all been dreaming of,” he said.

“It’s time to treat themselves and leave home for a bit and explore this natural wonder on their doorstep."

Currently, two flights operate out of Perth to Christmas Island per week.

Mr Bray said that was manageable at the moment but the island would like to see cheaper airfares.

“We see discounted flights to most other places around WA at the moment to encourage tourism, but not out here, which would be really appreciated as it’s not a cheap flight,” he said.

A one-way airfare on one of the twice-weekly flights to Christmas Island in September and October costs between $700 and $930.